The #4 Black Falcon Mercedes-AMG with Ben Keating, Jeroen Bleekemolen, Felipe Fraga, and Cooper McNeil won the CoTA 24 Hours. The topped off a dominating weekend that saw them score pole-position, hold the lead at the end of the first half of the race, and cruise to a four-lap victory.

“Nothing went wrong and the car ran perfect,” Bleekemolen said. “It’s always hard to even finish a 24-hour race so to win one overall is really special,” the Dutchman added. 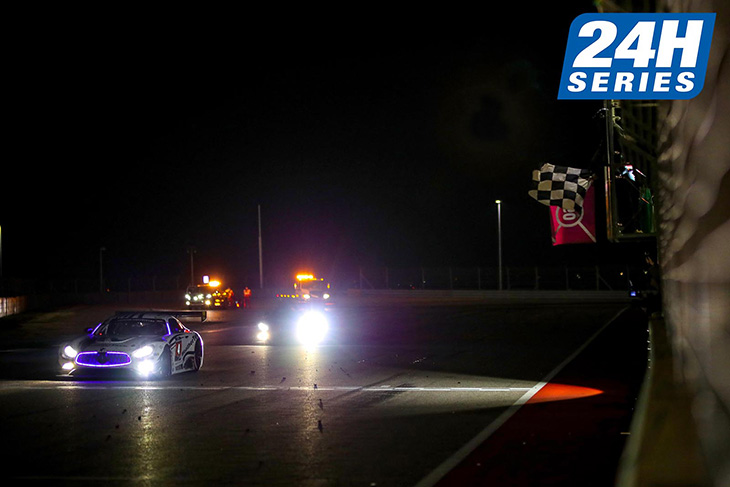 This is the second win in a row for Blackfalcon at the CoTA 24 Hours after their triumph in 2018.

The #91 Herberth Motorsport Porsche 911 GT3 R with Daniel Allemann, Ralf Bohn, Robert Renauer, and Alfred Renaur will end their weekend with a second-place finish. Like the #4 Mercedes, the #91 Porsche ran a largely drama-free race but lacked the long-run pace that allowed the #4 Mercedes to break away from the rest of the A6-classed cars.

The top-finishing A6-AM car was the #34 Car Collection Motorsport Audi R8 LMS Evo. The all-German lineup moved into the top three when the #90 TokSport Mercedes AMG GT3 ran into trouble with three hours left to run. The #34 Audi finished 11 laps off the lead.

Throughout much of the weekend, TokSport seemed to be the most likely team to be able to challenge the #4 Black Falcon crew for the race win. One bullet in TokSport’s gun, however, was knocked out of contention yesterday after the #70 Mercedes AMG-GT3 suffered a loss of oil pressure and was eventually retired.

The #90 Mercedes-AMG was one lap behind the #4 Mercedes when it suffered a right rear suspension issue. The team believed it was the result of contact with another car but no video footage could back up that belief. The car returned to the track but lost 11 laps on the leader during the repairs it underwent. It finished fifth overall and third in A6-PRO.

Fourth overall and second in A6-AM was the #85 CP Racing Mercedes-AMG GT3. Charles Putman, Charles Espenlaub, Jon Foster, and Shane Lewis finished on the same lap as the #34 Audi. 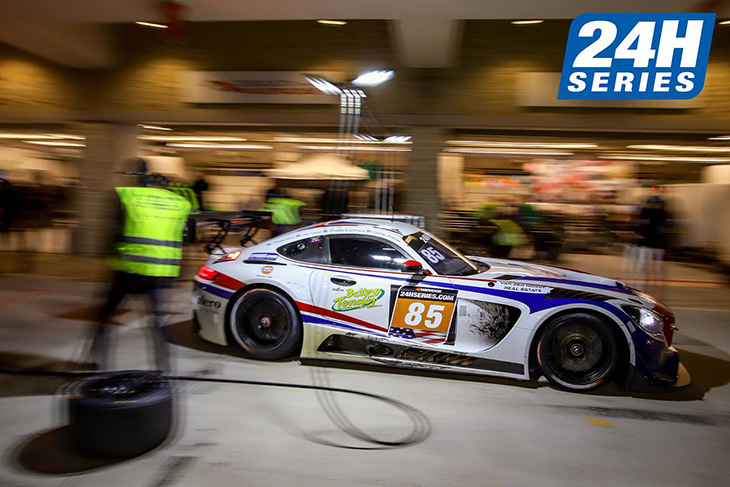 In TCR, the #101 Red-Camel Jordans Cupra TCR entry won the class with a three-lap margin of victory. Ivo Breukers, Steven Liquorish, Jeremy Daniel, and Jean-Francois Hevey. The manner that the #101 Supra took their win was similar to how the #4 Mercedes took theirs. The Dutch-based were rarely challenged for the lead of the class and drove a flawless race when many other teams in their class failed to do so. 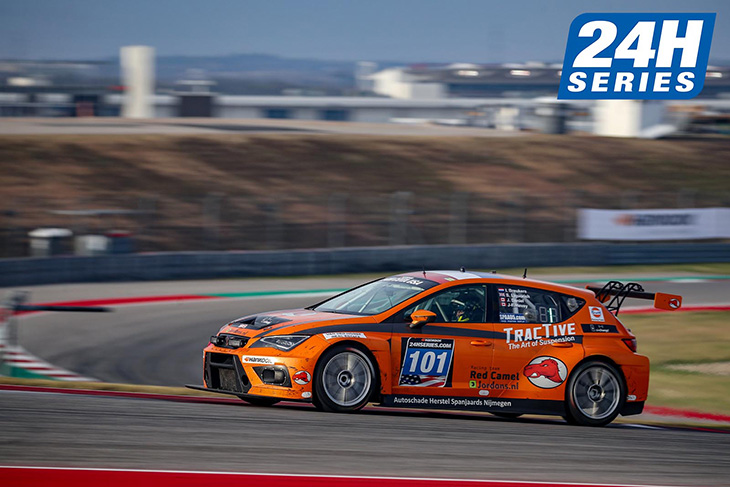 The #188 AC Motorsport Audi RS3 LMS ended the race in second. Their pursuit of a victory was stunted partially by what appeared to be fuel spilling from the car. The issue was reported by the stewards but the problem soon addressed itself without a need for the team to step in.

Rounding out the top three in TCR was the #112 Autorama Motorsport Volkswagen Golf. They finished six laps behind the #101 Cupra.

The #911 Porsche Lorient Racing 911 Cup of Jean-Francois Demorge, Eric Mouez, Dominique Bastien, and Frederic Ancel won the 991 class. For much of the race, the #911 Porsche was not anywhere near the fore of their class and seemed destined for a second-place finish. 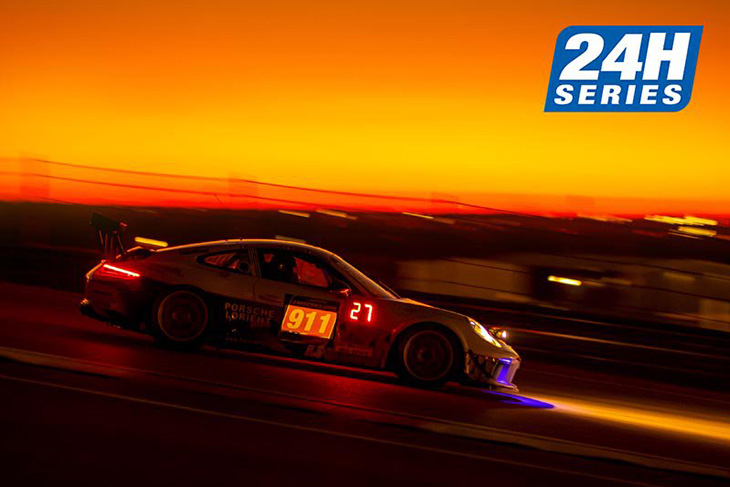 With just over two hours to run, though, the #906 Kelly-Moss Road and Race Porsche 911 Cup, which had a 22-lap lead on the class suffered a driveshaft failure. After the driveshaft was repaired, the differential on the #906 Porsche failed that beckoned the car back into the garage for extensive work. 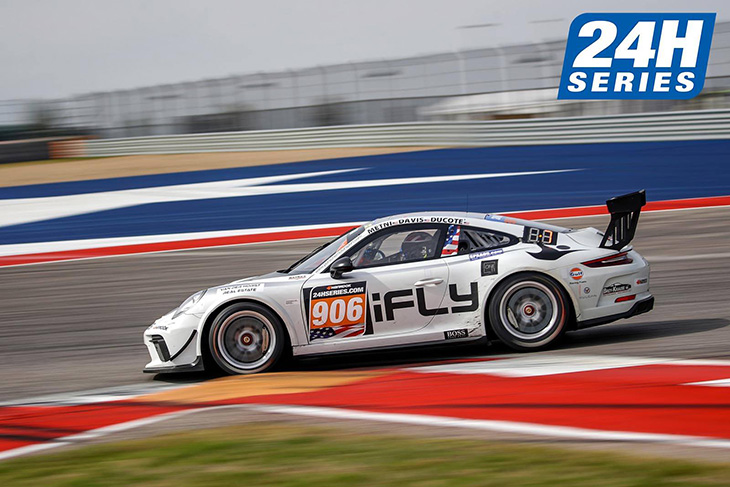 Those two events shattered the massive lead that the #906 Porsche had built up and handed the lead of the class, and eventually the win, to the #911 Porsche.

The #980 MRS GT-Racing Porsche 911 Cup ended the race in second, despite the car coming to a stop on the side of the track with under fifteen minutes to run. White smoke, possibly steam, was seen coming from the front of the car. With the #906 Porsche also running into issues, the #980 Porsche still managed to finish second.

The #906 Porsche had managed to build up a sufficient enough gap to claim the final step of the podium, even with the assortment of technical gremlins that plagued them in the final hours.

The GT4 class was one of the most spread out and tended to fade out of the picture of the race, particularly as the race went on and reliability issues in other classes shook up the order of the leading contenders.

The #710 Leipert Motorsport Lamborghini Huracan won the SPX class by 10 laps. There were just three entries in the class. 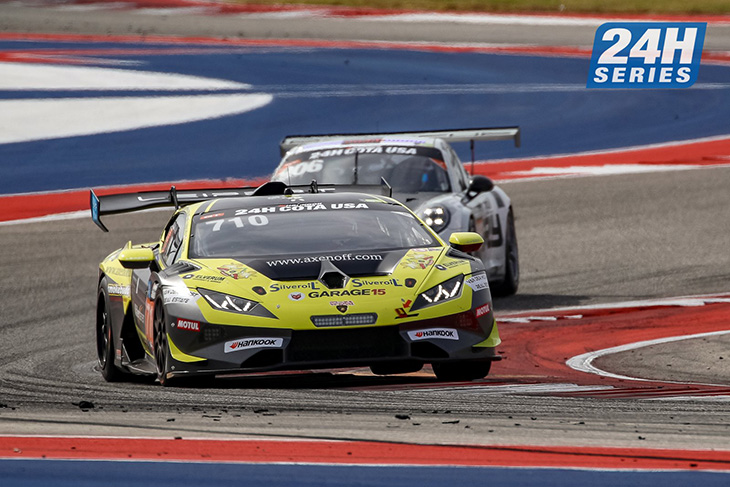