After a short break we’re resuming our refresh of a 2012 series of pieces by the DSC Editor prompted by the display of almost the then entire run of official BMW Art Cars as part of the Cultural programme supporting the Summer Olympic Games in London.

Part 4, which brings the series up to date – is tomorrow – The DSC Editor may, or may not, have expressed his views on some of the more recent efforts!

The 1990s opened with BMW still seeing the opportunities for road car marketing credibility from the Art Cars programme.

In 1990 the Japanese artist, Matazo Kayama, was presented with a six-cylinder in-line engine, 211 bhp BMW 535i to serve as a fresh canvas for his creation. 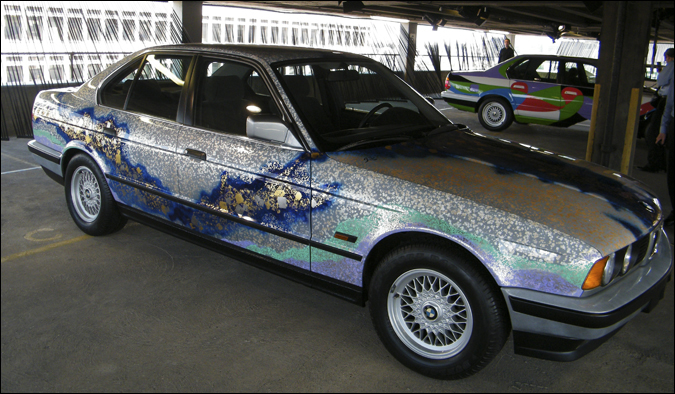 He based his Art Car design on a contract piece done for Tokyo National Museum of Arts. However, by using airbrush techniques he was able to produce a completely new interpretation of the original theme, ‘Snow, moon and cherry blossoms’.

Kayama used typical Japanese techniques such as Kirigane (metalcut) and Arare (foil printing). Having completed the Art Car the artist had this to say: ‘I only became completely aware of the clarity in the lineal design of the BMW after having seen the car in its new coloured robes’.

Amazing how a major commission can enhance your clarity of vision eh?

How different would the world look with colourful cars?

That’s a question the Spanish artist, César Manrique probably asked himself. He certainly believed that, as everyday objects, cars play an essential role in the appearance of our surroundings. 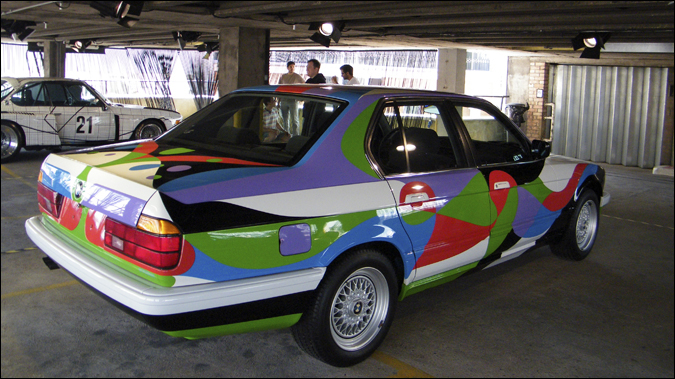 As well as being an architect, graphic designer, sculptor and landscape designer, Manrique was also a conservationist. This inspired him to design an Art Car that embodied a harmonious combination of technology and nature. 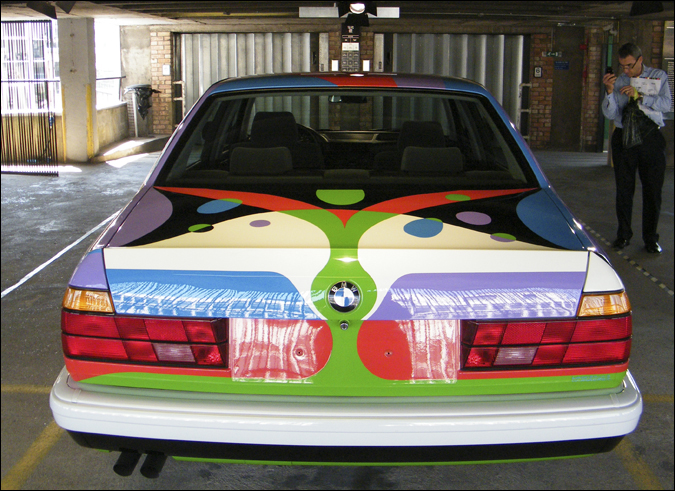 ‘That’s why I thought of designing the car in such a way as to give the impression of being able to glide through the air without any resistance’, he explained. A great idea – well executed featuring rolling, sweeping lines and lively colours symbolising graceful motions.

German artist A.R. Penck made sure of that by transforming this particular vehicle into a unique work of art. This bright red Art Car has been adorned with various symbols and images including the artist’s own ‘legendary’ stick figures. 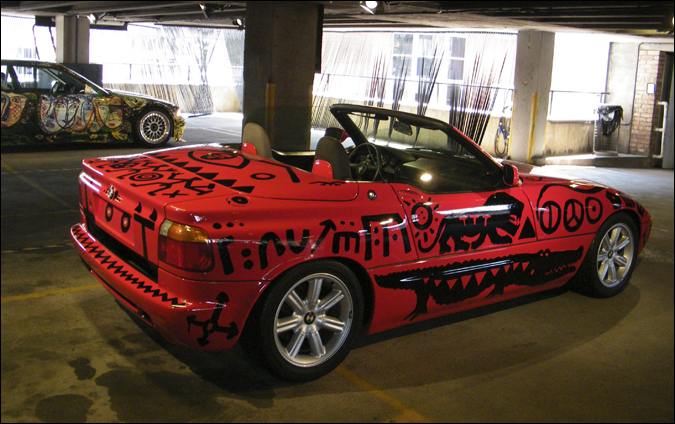 Penck’s car was also inspired by the work of artists such as Picasso and Rembrandt, as well as by early cave painting and a fascination with mathematics and physics. ‘Art on art, art on technology; that grabbed my attention, particularly the idea of art on a 3D element’, stated Penck commenting on his high-tech masterpiece. 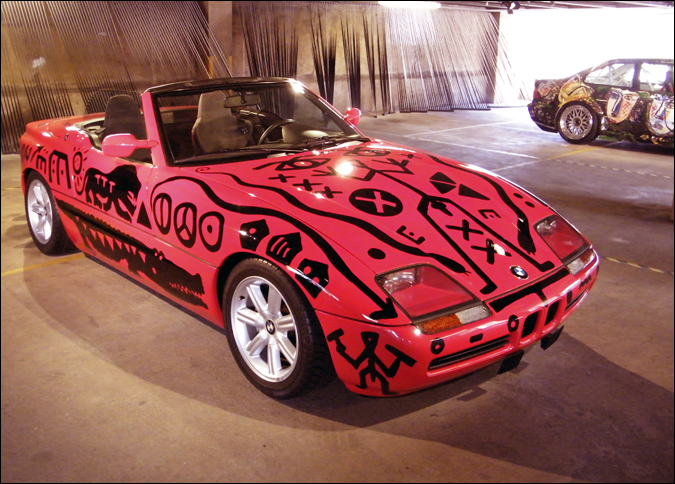 The 12th Art Car was the first to have been signed by a woman.

South African artist Esther Mahlangu coated the bodywork of the car in 1991 with the bright colours and clearly distinguishable ornamental shapes typical of her ethnic tribal Ndebele art. 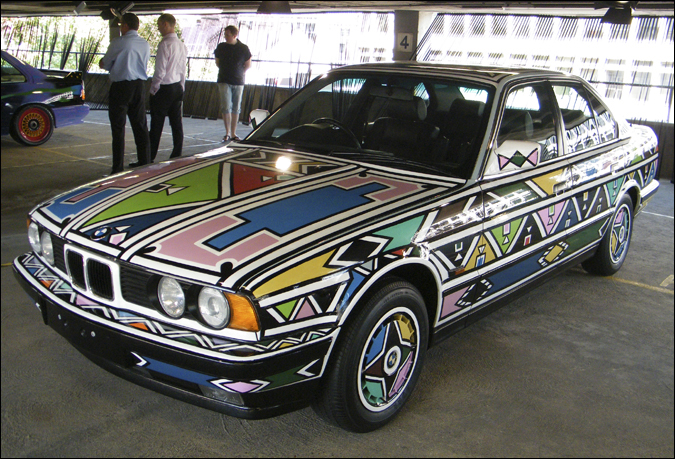 The ancient African art could not provide a more striking contrast to such a top-end, high speed, high-tech model (it says here).

The silhouettes and portraits on the paintwork challenge the observer to consider looking at himself in the mirror (apparently!). 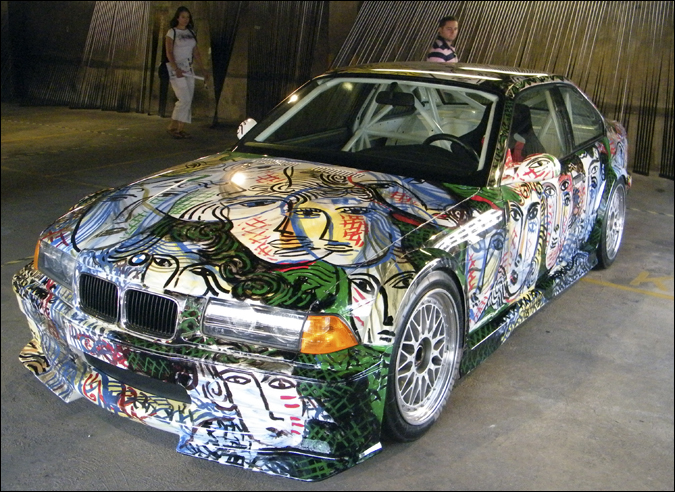 ‘A car is a coveted object in our society’. Chia explains that, as such a car is exposed to the stares of observers. ‘I decorated the surface of this car to represent these stares’.

This once again underlines the fact that some artists do talk an awful lot of old twaddle. 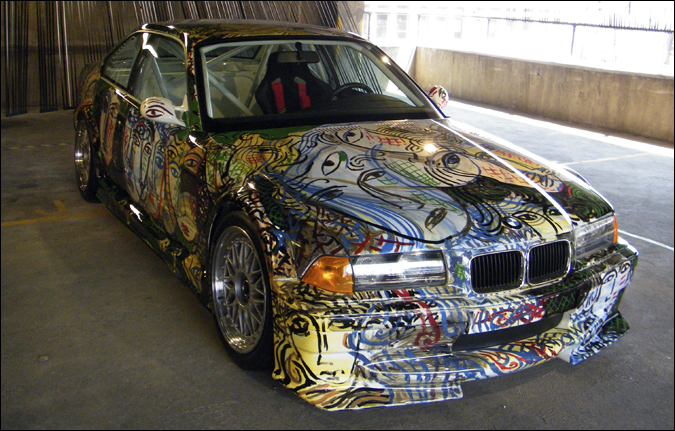 In April 1995 Bradford born David Hockney placed his signature on the BMW 850CSi marking the completion of the 14th Art Car and several months of hard work. 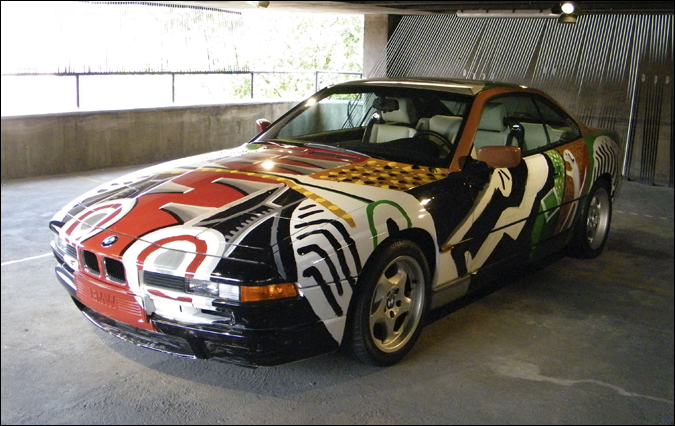 The artist aimed to portray the very innermost depths of the car. The result was an automobile whose contents were thoroughly turned out to the viewer. 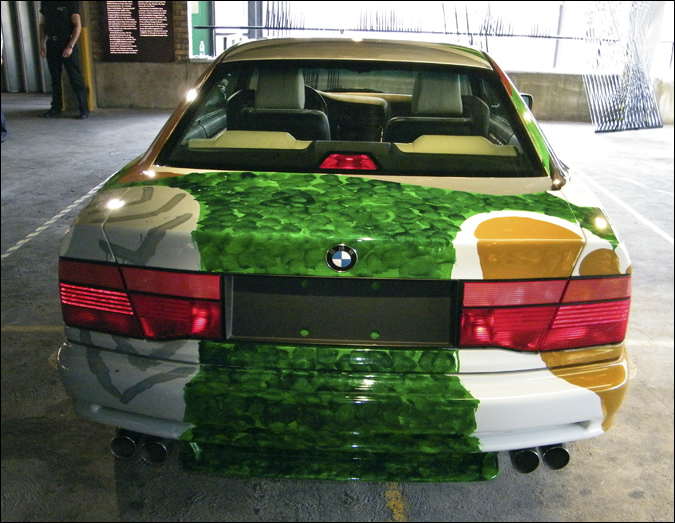 The artist’s notes also say (rather patronisingly if you ask me that) The more observant will notice the stylised suction vent on the bonnet and the contours of a driver on the door. 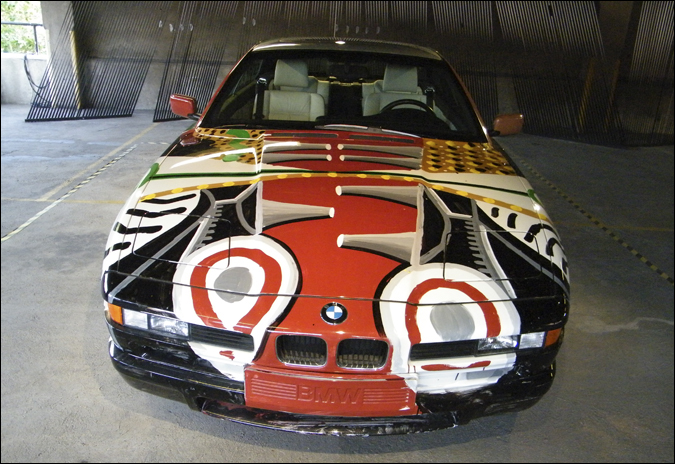