Michelin Pilot Challenge team, M1 Racing, has been forced to switch cars early in the running at Road Atlanta after a brake failure on their McLaren 570s GT4 sent Ryan Nash flying into the barrier at high speed. Nash was uninjured in the crash and was back in the paddock on Thursday morning, but the McLaren was unrepairable.

The team has sourced a Porsche 718 Cayman GT4 from Volt Racing, the car sporting Volt’s traditional neon yellow livery as opposed to the grey livery of the M1 Racing McLaren. Volt has opted to make an early switch to their new Aston Martin Vantage GT4 from this meeting. 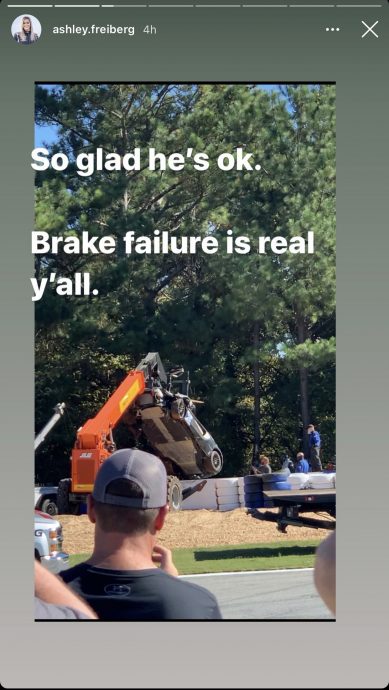 “Yesterday was interesting,” Ashley Freiberg, Nash’s co-driver said in a post to her Instagram. “We had a brake failure when Ryan [Nash] was in the car and basically the front wheel sensor failed which caused the ABS to fail and the car did not slow down at all going into Turn 6 and he flew into the woods,” Freiberg described.

The team had the replacement Porsche ready to go for Free Practice 1 where they finished the session 17th in class. There are 22 entries in Grand Sport this weekend.

“It’s an adventure but I’m still feeling good about it. Ryan is doing okay, thankfully, that was a crazy crazy crash crazy watching the in-car, it was intense,” Freiberg said.