With the confirmation from Audi that they will field a factory effort in international Sportscar racing from 2023 there has been a flurry of interest in just what the new rules are that have attracted the most successful marque in the modern era back into the fray.

With an extended process of evolution for the next generation of top-class prototypes some confusion is understandable – Here then is the first of a series of ‘explainers’ to point to just exactly what to expect!

What does LMDh stand for?

A simple question with a somewhat unsatisfactory answer!

D is Daytona – reflecting the IMSA (International Motor Sports Association) adoption of the ruleset and its future acceptance in the IMSA Weathertech Sportscar Championship;

H – is a trickier question – with no clear answer – The ACO would love it to be ‘Hypercar’ – IMSA are not fans of that moniker – They, in turn, favour ‘Hybrid’ to reflect their first step into the part -electrified pond.

In the FIA WEC the class will be known as ‘Hypercar’, the class name encompassing both the LMDh cars and the Le Mans Hypercars introduced from the 2021 season – cars built to both sets of regulations will be subject to a single balance of performance process.

The cars will be based on the next generation of chassis also destined for LMP2 (where they will feature a year after their introduction in the top class, replacing the current cars.

The four current LMP2 chassis suppliers were selected by the ACO and IMSA: Dallara, Ligier, Multimatic and ORECA.

Manufacturers can choose to partner with any of the four but must use the chassis as supplied.

The cars will run to a minimum weight of 1030 kg

Each car will feature a manufacturer defined internal combustion engine producing a minimum peak of 470 kw (C.630 BHP) at the wheels.

Here’s the ‘spec’ aspect of the cars – a move to control the cost of electrification – each car, from whatever manufacturer, will feature identical ‘spec’ hybrid systems pushing a maximum of 50kw of power continuously through the rear axle, the battery set allowing c.200 kW of regeneration capacity.

After a competitive tender process, the ‘spec’ hybrid system will be provided by a collaboration between Bosch and Williams Advanced Engineering – motor by Bosch, battery systems by Wiliams, with the spec gearbox from XTrac.

As part of the Balance of Performance process, the aerodynamic balance is capped at 4:1 downforce: drag

Compared to current LMP1 and DPi cars there is more freedom to style the bodywork of the cars for manufacturer relevance and brand recognition. 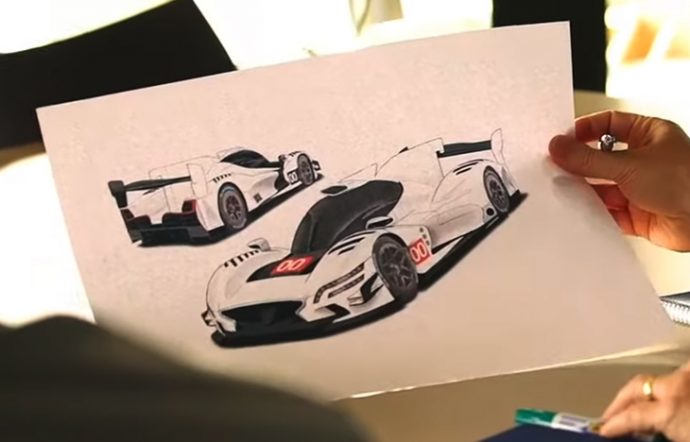 No changes though are permitted to the floor or underfloor.

In terms of lap-times at Le Mans the new breed of cars are targeted for at or just under 3:30 racing lap times around the full 24 Hours circuit significantly less quick than the outgoing LMP1 Hybrids but with the trade-off of likely much larger fields in the top class than in recent years.

Estimated budgets are c.1 million Euro for a full car without engine.

Where can they race?

The initial homologation is for five years.

Whilst the regulations state that only a ‘mainstream’ manufacturer can homologate an LMDh car that does not mean the cars cannot be raced by a non-factory team.

Customer cars are likely to be made available from a number of entrants.

Whilst an introduction in the FIA WEC has not been counted out in 2022, a 2023 calendar year start now looks more likely with the interruption to the commercial calendar in 2020 due to the COVID19 pandemic.

Who is likely to build

Audi has all but confirmed a programme that would include Le Mans and Daytona but have not yet confirmed whether their full season commitment would be in the FIA WEC and/ or IMSA.

Whilst a factory programme seems to be the chosen direction there’s no confirmation either of whether that will be with an in-house team or via ‘partner’ private teams, as they currently do in GT3.

Porsche were the first manufacturer to confirm a formal commercial evaluation of an LMDh programme and have confirmed that their process is unaffected by the Audi announcement.

Industry sources are confident that they too will commit.

Acura/ Honda are also now a ‘presumed yes’ after recent statements surrounding their revised customer Dpi programmes for IMSA in 2021.  Both 2021 teams have made it clear that they see a future e Mans programme as part of their commitment to the brand.

There are multiple other manufacturers, small and large in the mix for global and/ or US-based LMDH programmes with Hyundai, Lexus, McLaren, General Motors, Ford, and Lamborghini amongst those to have expressed interest though not all will likely progress.