Defending GT500 Champions Team Kunimitsu have unveiled the title sponsor of their Honda NSX-GT that will compete in the 2021 Autobacs Super GT Series: Stanley Electric Co. Ltd, a leading automotive lighting parts manufacturer, will succeed Raybrig as the sponsor of the #1 Stanley NSX-GT.

Stanley are the parent company of Raybrig, the consumer automotive lighting brand that will be retired by Stanley in on 31 March. Raybrig had sponsored Team Kunimitsu in some capacity since their class victory in the 1995 24 Hours of Le Mans, including as the title sponsor of their GT500 entry from 1997 to 2020.

Therefore, it is more accurate to say that this is a continuation of a long-tenured sponsorship, rather than a brand new one.

In fact, the phrase “Ray Of The Speed” that is faintly scribed on the car is a nod to the years spent in Raybrig royal blue. That said, it will be a drastic change from the striking blue Raybrig Hondas that have graced many a JGTC/Super GT race in years past, to Stanley’s orange. 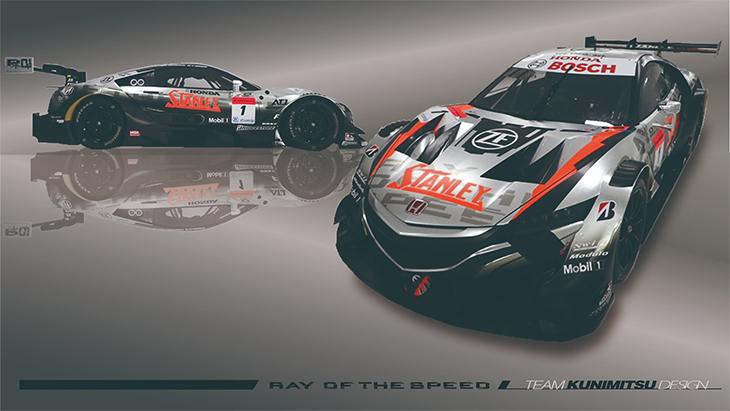 On the rear wing endplate is “P01”, which has typically represented pre-season testing liveries for Team Kunimitsu entries in the Raybrig years – so it’s uncertain if this silver and black gradient scheme is just another pre-season exclusive, or if this will remain the team’s primary livery once the 2021 season begins.

As announced on Friday, two-time and defending GT500 Champion – and three-time and defending Super Formula Champion – Naoki Yamamoto will drive the Stanley NSX-GT alongside his champion co-driver Tadasuke Makino, who was discharged from hospital on Saturday after a month-long bout with meningitis. Yamamoto has spent nine of his eleven previous GT500 seasons at Team Kunimitsu, winning the title in dramatic fashion in 2020 alongside Makino, and two years prior to that in 2018 alongside Formula 1 World Champion, Jenson Button.

Team President and General Manager, the legendary Kunimitsu Takahashi, will continue to lead the team alongside Director Kazuhiro Kojima. Team Kunimitsu will continue their long-standing relationship with Bridgestone as their tyre supplier, and Auto Technic Japan (ATJ) will continue as their vehicle maintenance partner.

On the pit wall, there is another significant change: Hitoshi Iyoki, the team’s Chief Engineer during their 2018 and 2020 Championship seasons, will be replaced by Satofumi Hoshi. Hoshi was Chief Engineer for Autobacs Racing Team Aguri (ARTA) from 2016-2019, and was then promoted to Technical Director of ARTA in 2020. He has also worked in Super Formula with Team Mugen, where he was most notably the race engineer for current F1 star and Grand Prix winner Pierre Gasly in 2017.

“Last season was a dramatic year, as we won the championship, and thanks to all of you, it was a great season. This year, the car will carry the new Stanley logo and will be called the #1 ‘Stanley NSX-GT’,” Takahashi said in a press release on Monday. “With the help of our reliable drivers Yamamoto and Makino, the entire team, and all of our supporters, we will continue to fight to win the championship again this season so that we can deliver excitement to our fans through motorsports. We look forward to your support for Team Kunimitsu!”