The #10 Wayne Taylor Racing Acura ARX-05c of Ricky Taylor, Filipe Albuquerque, Helio Castroneves, and Alexander Rossi has won the 2021 Rolex 24 at Daytona. This is the third consecutive win at the Rolex 24 for Wayne Taylor Racing and it comes after Albuquerque fended off a late-race charge from the #01 Ganassi Cadillac DPi-V.R. It was an intense battle for the overall win with five cars all fighting for the top spot in the final hours of the race.

Second in the class was the #48 Ally Cadillac DPi-V.R. of Jimmie Johnson, Simon Pagenaud, Kamui Kobayashi, and Mike Rockenfeller. The #48 Cadillac inherited second place after a late-race puncture struck the #01 Cadillac.

Rounding out the top three was the #55 Mazda RT-24P of Jonathan Bomarito, Oliver Jarvis, and Harry Tincknell.

The attrition rate in DPi had been very low for the first half of the race and trouble did not strike the class until the #5 Mustang Sampling/JDC-Miller Cadillac DPi-V.R. found themselves in the wrong place at the wrong time. The #16 Wright Motorsports Porsche 911 GT3 R was hit from behind by the #9 Pfaff Motorsports Porsche 911 GT3 R in the braking zone of Turn 1. That contact sent the #16 Porsche sliding deep into the turn where it hit the #5 Cadillac.

The #5 Cadillac would go on to retire under half an hour before the finish. With no other DPi cars running into serious trouble, they had to settle for a last-place seventh in class result.

The #31 Whelen Engineering Cadillac DPi-V.R. had a gearbox issue that sent them to the garage. They lost twenty-two laps on the rest of the class and finished the race sixth in DPi.

GTLM saw the coronation of Corvette Racing who dominated the class and secured a 1-2 finish with Jordan Taylor, Antonio Garcia, and Nicky Catsburg in the #3 Corvette getting the better of their teammates Tommy Milner, Nick Tandy, and Alexander Sims in the #4 Corvette. 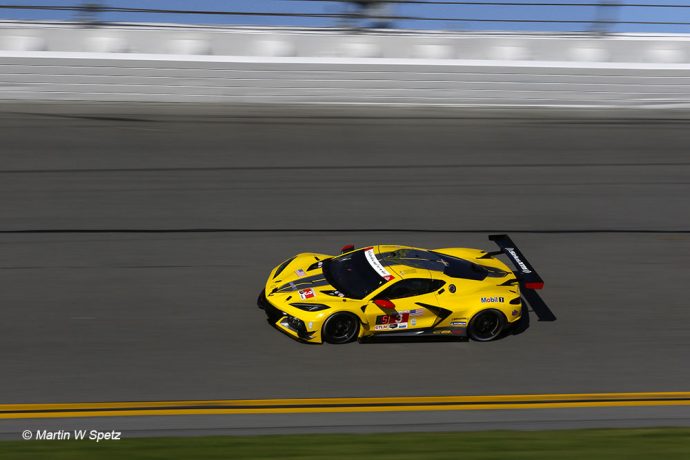 Corvette held onto the top spots in the class for virtually the entire race, though, the #24 BMW M8 GTE did make a run for the top spot and held onto the lead in the final hours before dropping back down the order. That effort from the #24 BMW was the only serious challenge Corvette faced all race.

It was a tough race for the #79 WeatherTech Racing Porsche 911 RSR. Their race could not have started much worse as they were hit from behind when the field bunched up coming to take the green flag. The contact sent the #79 Porsche spinning in front of the entire GT field with cars fanning out to avoid a crash.

The rear bumper and diffusor eventually of the #79 Porsche eventually fell off and needed to be replaced. Damage to the right front also needed to be repaired which dropped the car all the way down the order. From there, the team had a clean race and worked their way to the back of the GTLM field, but with no one else running into issues, they had to settle for sixth.

The #18 Era Motorsport ORECA 07 of Paul-Loup Chatin, Ryan Dalziel, Kyle Tilley, and Dwight Merriman took home the honours in LMP2. They beat out the #8 Tower Motorsport ORECA 07 of John Farano, Gabriel Aubry, Matthieu Vaxiviere, and Timothe Buret. The #8 ORECA team conceded the lead of the race in the final five minutes as they needed a splash-and-dash fuel stop. Rounding out the top three was the #82 DragonSpeed ORECA 07 of Eric Lux, Devlin DeFrancesco, Fabian Schiller, and Christopher Mies. It was a quiet race for the #82 ORECA but the car needed to make an unscheduled pitstop to address some form of liquid which was spraying from the rear of the car. That dropped them four laps behind the leading cars.

There was a high amount of attrition in the class with three cars retiring from the race in the early going. Five of the classes ten cars ran into serious trouble at some point in the race.

The #29 Racing Team Nederland ORECA 07 and the #20 High Class Racing ORECA 07 both retired with gearbox issues. The #29 ORECA’s problems came as a result of Frtis van Erd’s crash at the bus stop. The #20 ORECA’s issues on the other hand were more spontaneous with their gearbox expiring as the car was on track, they finished forty-eighth. The #29 ORECA finished forty-seventh.

Retiring with a damaged engine as a result of a crash was the #81 DragonSpeed ORECA 07. Rob Hodes locked the brakes into Turn 1 and understeered into the guardrail at corner exit. The contact seemed minor and Hodes got the car back to the pits, but the damage to the engine spelt the end of that team’s race. They finished forty-ninth, last overall.

The #52 PR1/Mathiasen Motorsports ORECA 07 and the #47 Cetilar Racing Dallara P217 both ran into issues in the night. For the #47 Dallara, it was an overheating gearbox that saw them drop out of contention for the race win – they had been leading the race in the early morning. The #47 Dallara ended the race sixth in class.

The #52 ORECA had been through the wars dealing with a misfiring engine, then a faulty starter motor, then an off for Nicolas Lapierre at the International Horseshoe, then yet more issues with the clutch and starter motor. The team spent much of Sunday in and out of the garage before retiring just 38 minutes short of the chequered.

The #74 Riley Motorsports Ligier JS P320 of Gar Robinson, Scott Andrews, Oliver Askew, and Spencer Pigot took home the win. The race in LMP3 was all about who could keep the car out of trouble and on track. As others in the class ran into trouble, the #74 Ligier kept their feet underneath them with impressive performances from Scott Andrews and Oliver Askew. 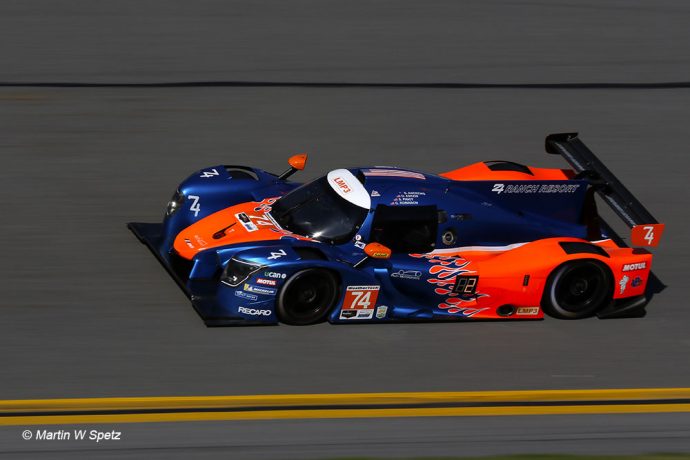 Three laps behind the winning car was the #33 Sean Creech Motorsports Ligier JS P320 of Joao Barbosa, Lance Willsey, Yann Clairay, and Wayne Boyd. Rounding out the top three was the #6 Muehlner Motorsports Duqueine D08 of Mortiz Kranz, Laurents Horr, Kenton Koch, and Stevan McAleer. It was a fight from behind for the #6 Duqueine who recovered from a crash in the first hour of the race to lead the class in the night.

There were significant question marks coming into this race for LMP3. This was going to be the longest race an LMP3 car would embark upon and reliability was going to be a factor. Practically all of the LMP3 runners ran into trouble at some point – some more serious than others.

The only car in the class to retire from the race was the #7 Forty7 Motorsports Duqueine D08 which suffered an oil pump failure. Other, non-terminal, issues for LMP3 cars included a water leak which caused an electrical issue on the #91 Riley Motorsports Ligier JS P320 and brake issues for the #54 CORE Autosport Ligier JS P320.

Going from the Michelin Pilot Challenge to the top step of the podium at the Rolex 24 at Daytona in their first race in IMSA’s premier series was Winward Racing whose #57 Mercedes-AMG GT3 of Maro Engel, Russell Ward, Philip Ellis, and Indy Dontje took home the win in GTD. It was a masterful night stint from Dontje that moved the car into contention with solid driving from Engel to bring the car home against fellow factory drivers.

It was a tough race for GRT Grasser Racing Team who had to retire both of their Lamborghini Huracan GT3 Evos. The first to encounter trouble was the #111 Lamborghini who suffered an electrical issue, but the team got those problems fixed. Shortly after that, the #19 Lamborghini had a fire in the engine bay that spelt the end of that team’s day. The #111 Lamborghini, which was trying to recover from their electrical issues, retired about six hours after their teammates with an engine issue.

The #64 Team TGM Porsche 911 GT3 R retired following an incident with the #97 TF Sport Aston Martin Vantage. The car underwent repairs and made a brief return to the track before being retired. The #97 Aston Martin continued with no significant time lost.

Another team who a race to forgot was Vasser Sullivan whose pair of Lexus RC-F GT3s both ran into trouble. The #12 Lexus had a transponder issue and then spent an hour behind the wall with other mechanical issues. Just before halfway, it stopped on track at the bus stop was towed back to the garage. The #12 Lexus was the last GTD to finish the race.

The #14 Lexus on the other hand was having a much better race in the first half. The car was leading and a frequent member of the top five in the class. A water system issue near the halfway mark sent that car to the garage, dropping it down the order. It then spent another twenty minutes in the garage with yet more unidentified issues, capping off a miserable race for the team.

In the last four hours of the race the #9 Pfaff Motorsports Porsche 911 GT3 R suffered a drivetrain failure. It pulled off the track on the back stretch after moving slowly through NASCAR turns 1 and 2. The team got the car back on track after just over an hour of repairs.

The #42 NTE Sport Audi R8 LMS GT3 retired with under twenty-five minutes to run. It was a gearbox issue for the team who had struggled to make much of an impact in the race as the Audi.

Quotes from post-race interviews and additional analysis will follow soon.