Here’s Part 2 of our series looking at the cars and programmes that brought hybrid technology to endurance racing, You can find Part One HERE >>

With programmes covered here covering the entry of the into LMP1, and into 24 Hour GT racing with real factory backing this was a period where the industry started to take notice of what was to come!

The first LMP Hybrid to race was a Zytek 07S, updated to Ginetta-Zytek 09S spec, and entered as a 09HS. 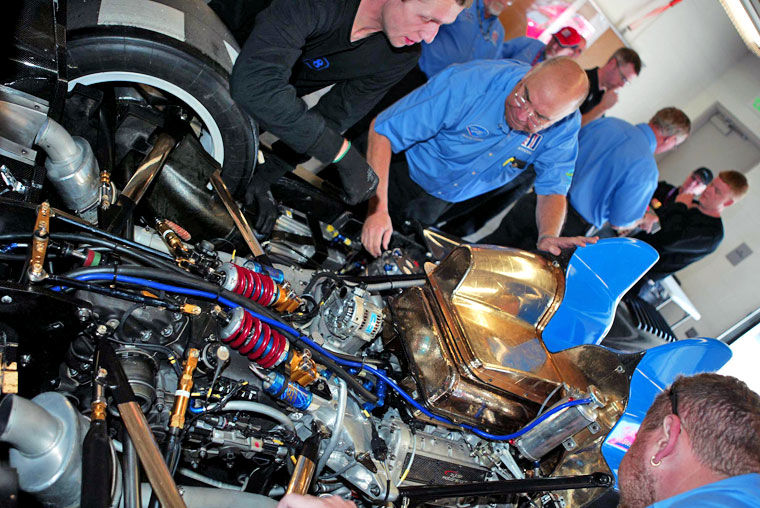 The car was built with a 625 bhp ethanol-fueled Zytek 4.5 litre V8 and a 35-45kw three-phase induction electric motor powered by a Continental-built lithium-ion battery pack, fed by a KERS braking energy regeneration system, all of the hybrid tech drawn from road car technology (as per the standing regulations) with some associated weight issues as a result. 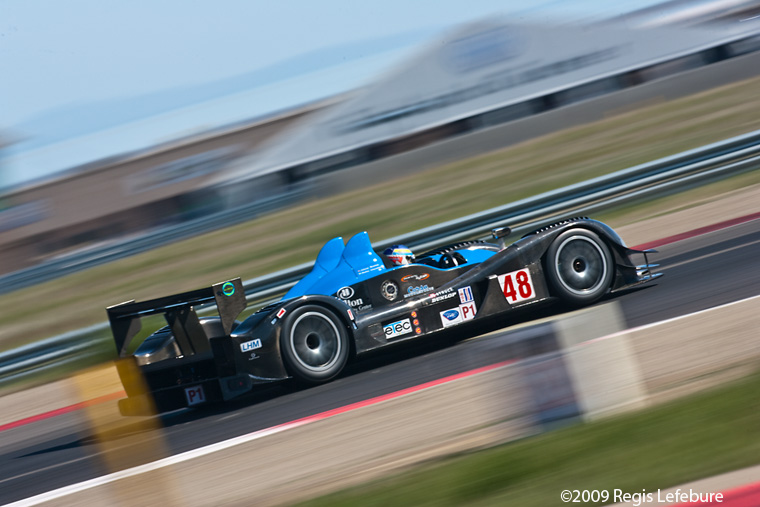 The car was fielded in ALMS competition by Steve Pruitt’s Corsa Motorsport debuted at Miller Motorsports Park in May 2009 (above) and went on to race in five of the sprint events pedaled by Johnny Mowlem and Stefan Johansson. The car wasn’t on the ultimate pace but showed some promise, including an overall podium (3rd) at Lime Rock. 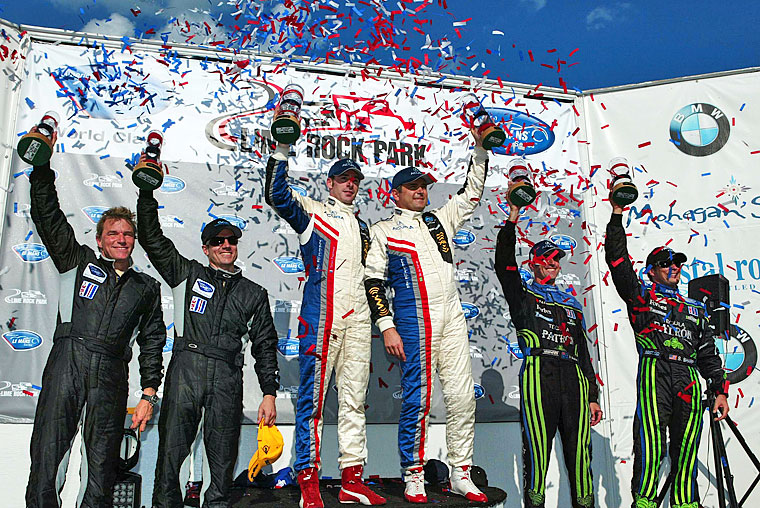 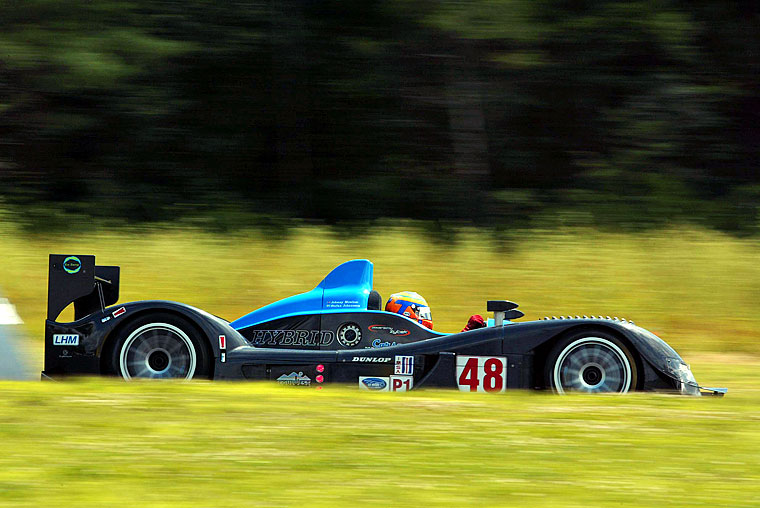 2011 should have seen a second-generation Zytek Hybrid emerge, the car was a reserve entry for Le Mans entered under Rangoni Motorsports.

It emerged though at Spa (below) under the MiK Motorsport banner, but issues for the Hybrid system saw it race there in conventionally powered trim, the car reappeared at Imola, still in conventional form and then at Silverstone where a substantially revised hybrid system had been fitted. 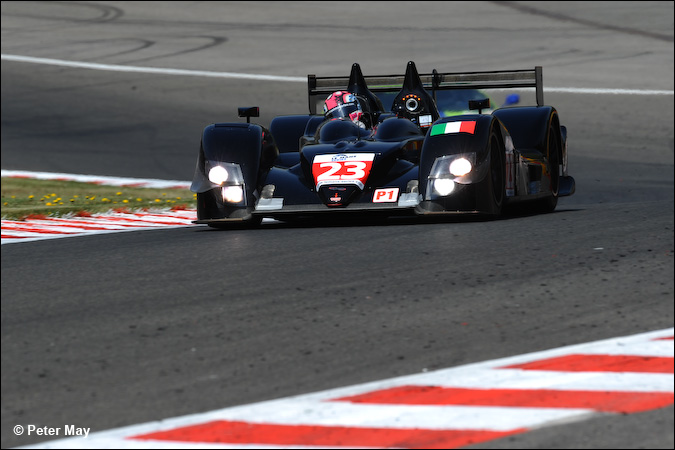 Sadly though the car suffered a significant rear-end fire in practice that counted the car out for the weekend, the damage later having been confirmed as having affected the chassis, the car did not reappear and therefore never raced as a hybrid!

Porsche’s first racing hybrid was based on their then-current GT3 offering. 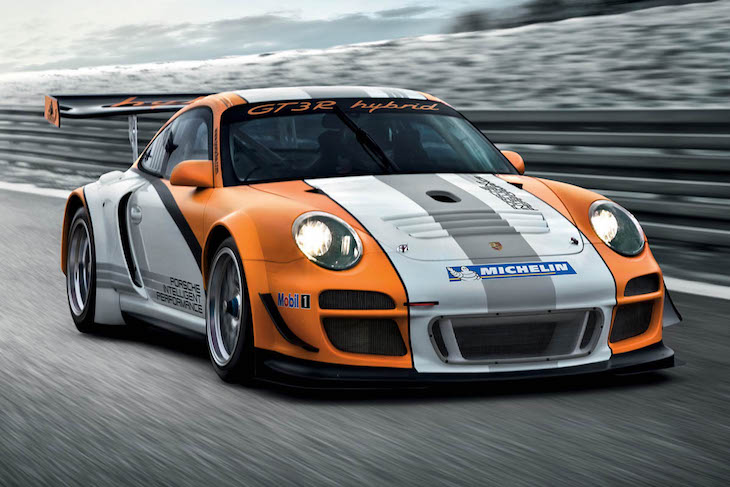 It was not, despite some publicity at the time, the first GT racing car to feature hybrid power, nor was it the first to race – It did though take the game on by a step or two – and Porsche’s approach to publicising the effort gave hybrid powertrains a substantial publicity boost.

The GT3-R was equipped with two electric motors, developing a total output of at least 163 kW (219 hp), driving the front wheels. This in addition to the rear-mounted 373 kW (500 hp) 4.0-litre flat-six engine driving the rear wheels.

The car (only one example was built) debuted in a VLN race on 27 March 2010 finishing 6th overall. The next VLN race saw the car on the overall podium, 3rd. 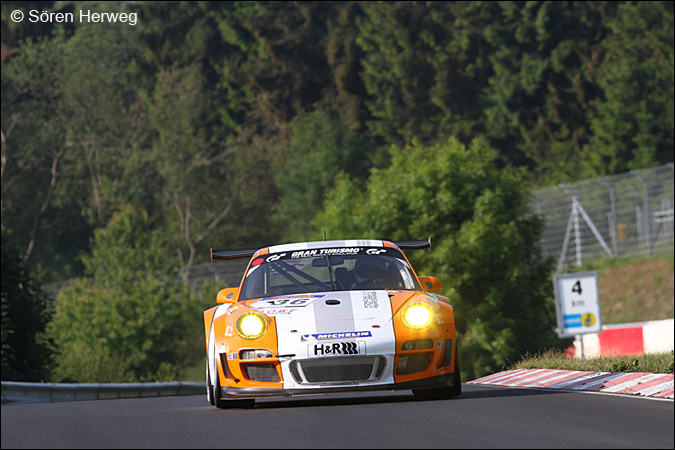 Both of those outings were a precursor for the Nürburgring 24 Hours where the car starred and looked set to take an overall victory (above), a lap ahead of the field as several top prospects faltered until into the 23rd hour the Porsche was out, ironically with a failure of the usually iron-clad flat-six engine! 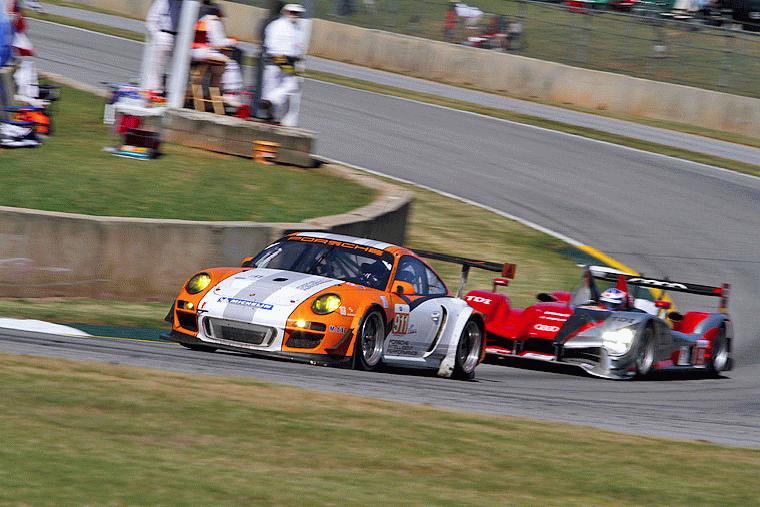 2010 was rounded out with a pair of outings in the Intercontinental Le Mans Cup at Petit Le Mans and Zhuhai, the car finishing both races, delayed at Road Atlanta but an astonishing 6th overall in China, ahead of all of the other 10 GT1 and GT2 runners.

2011 saw the car back out and racing again and on 28 May it took its only overall win with victory in the VLN. That probably didn’t help the team for the Nurburgring 24 Hours though, the car was saddled with weight and restrictor penalties that, coupled with some reliability issues, saw the car finish way down the field.

The car, based on the ORECA 01 chassis, was unveiled at Paul Ricard during the Le Mans Series race weekend in April 2011 – It had already been announced as an entry for the 2011 Le Mans 24 Hours (before even being unveiled).

That was to be supplemented by a ‘Flybrid’ KERS capable, it was stated, of 100kw of energy storage in a flywheel rotating at 60,000rpm, the hybrid located between engine and gearbox. 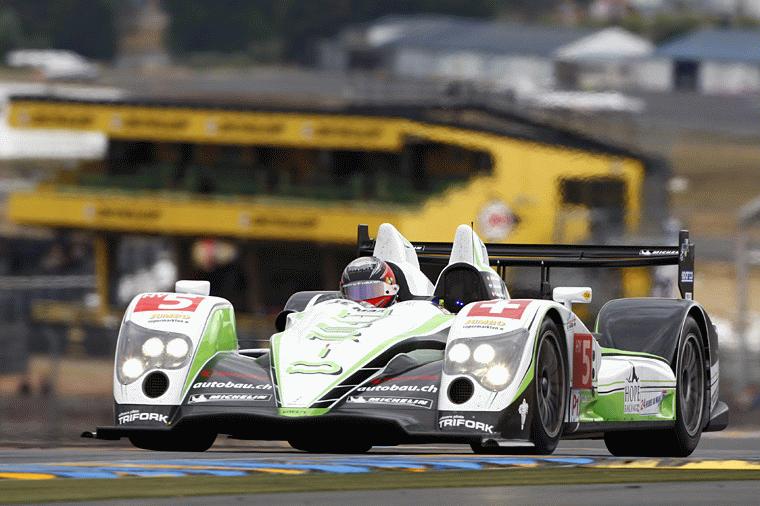 The programme struggled for momentum, the team withdrawing the car from its proposed first race outing at Spa after engine vibrations led to breakages in the ‘quilldrive’ connecting the engine to the KERS unit.

That came on the back of a poor performance at the Le Mans Test, the car failing to meet the regulatory 400m distance on hybrid power only set by the ACO, the Bugatti track on which the test was attempted not proving to provide the car with sufficient opportunity to ‘charge’ the system. It later emerged too that the ‘Flybrid’ was operating at only 20% capacity!

Despite all of that the car was cleared to race at Le Mans – its competitive debut! 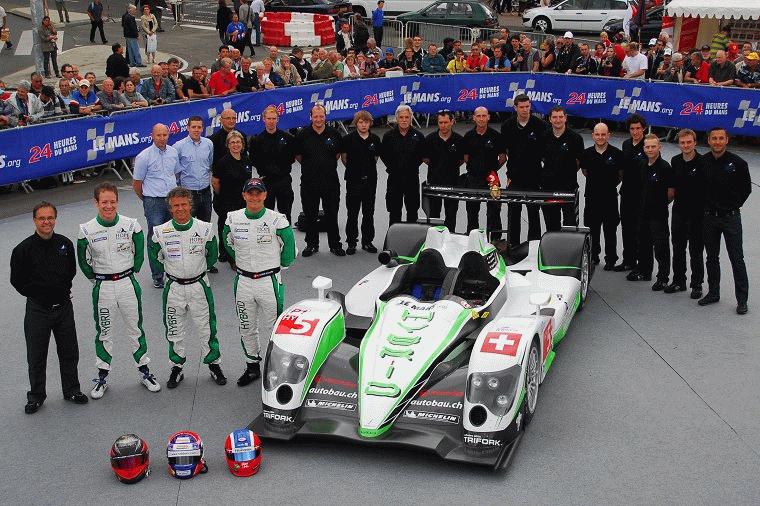 It therefore became the first hybrid-powered car to race at the 24 Hours.

Steve Zacchia, Jan Lammers, and Casper Elgaard would drive and it always looked like an uphill battle. The car qualified 24th in a combined 28 car LMP1 and LMP2 field with a best lap in the 3:47s.

The car never ran in the top 20 and was soon tumbling down the order as repeated engine issues hit, the little 2 litre not playing nicely with the KERS system it seemed. The team finally called it a day in the 15th hour whilst running at the back of the field, a small fire finally breaking their resolve. 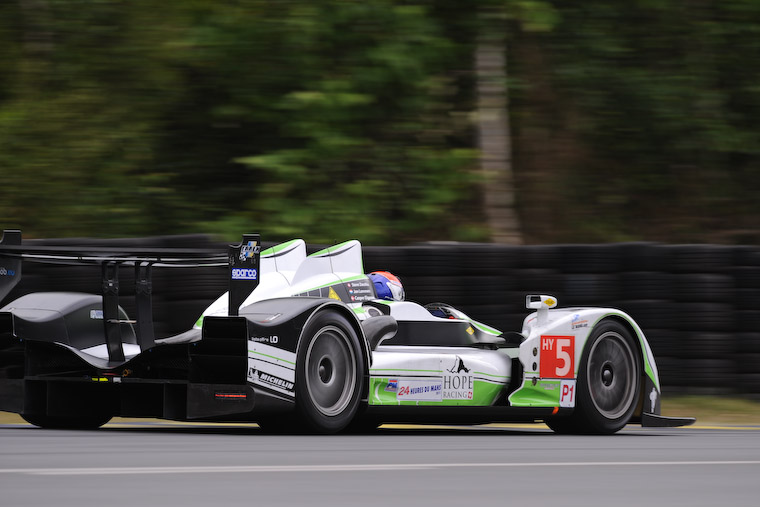 It would be the one and only race appearance for the car, Hybrid technology would be back at Le Mans soon though and with a vengeance!

James Glickenhaus’s journey into bespoke exotica began with the Ferrari Enzo-based Ferrari P4/5 by Pininfarina in 2006.

Scroll forward half a decade and the story reached the racetracks with the completion of the P4/5 Competizione which was designed (as was the earlier car) by a team led by Pininfarina’s Paolo Garella, but the underpinnings of the car were completely different from the 2006 car.

Instead the race car was based on a Ferrari F430 Scuderia but powered by the GT2 version of the normal aspirated V8. 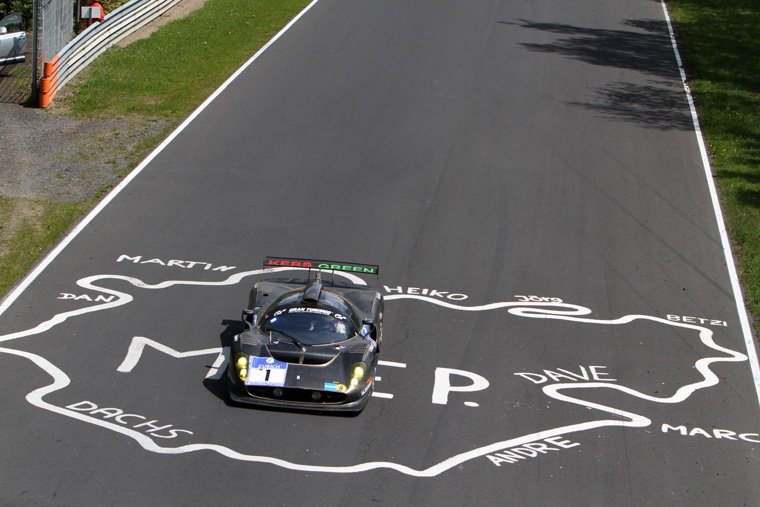 After competing in the VLN and Nurburgring 24 Hours in 2011 the car was returned to Podium Engineering in Italy (where it had been built) for installation of an in-house developed c.50bhp KERS system including battery pack.

At the same time the car was fitted with a dorsal fin and redesigned as the P4/5 Competizione M (for Modificato). 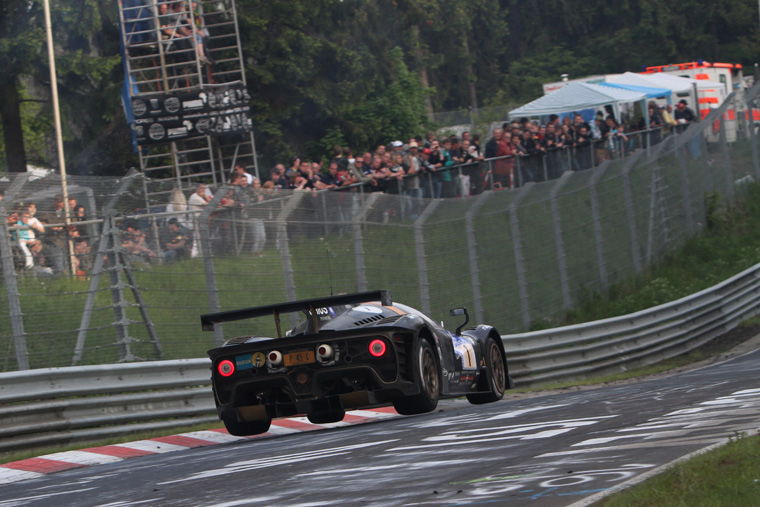 The car again raced at the Nurburgring 24 Hours as well as in two pre-N24 VLN races. The season’s best result came in the 24 Hours where despite a hybrid system failure and a brief pitlane fire the car came home to a 12th position overall finish. 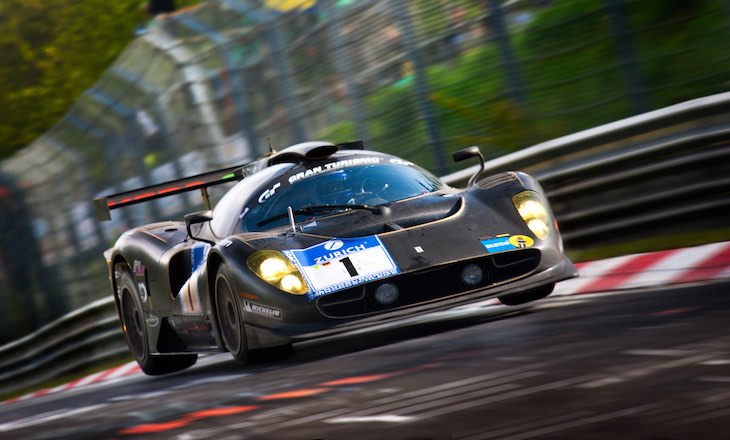 The car returned in 2016 but crashed heavily in qualifying and did not start the race, it is now road registered and has joined Jim Glickenhaus’s astonishing collection in New York.