There are labels aplenty for those with physical disabilities. Most of them smack of disinfectant and despair. “Impaired”, “special”, “different”. What, then, do you call those who have the use of all their limbs – as “normal” clearly isn’t appropriate anymore?

“That’s simple“, says Gustav Engljähringer with a smile, “you are a pedestrian.”

That serves to break the ice in a conversation that has every potential of becoming awkward. “There is still a lot of insecurity when it comes to dealing with physical handicaps, and the people who have them”, says Engljähringer, “that’s perfectly understandable. People worry about coming across as insensitive, hurting feelings. Our project is about showing that – while you could call us crazy for coming up with an idea such as this – none of us are ‘abnormal’. Maybe it will help bring down some of these barriers.”

That project is called Mission Possible, and it will see five paraplegic drivers share a car in the next edition of the Dubai 24 hour race. Engljähringer, who runs a coach building business in Austria that also manufactures race transporters, has been actively involved in motor racing since 2007. He currently campaigns a Jaguar bodied V8STAR silhouette car in the Histo-Cup, a popular Central European series for historic and post-historic cars.

The idea for going endurance racing came about in a conversation with fellow racer Rainer Küschall in Monza some two years ago.

“We got to talking, threw around some ideas, and decided we would try something like this one of these days. That day is now!”

Along with Engljähringer and Küschall, Marc Dilger from Germany and Mike Smit of the Netherlands will be on the team, with a fifth driver yet to be nominated. A competitor from Israel could not join the team, for unexpected political reasons:

“Dror Cohen is a two time Dakar rally participant, but he is also a former Israeli airforce pilot, and he won’t get a visa for Dubai” – a sad thing in this day and age. The team’s car of choice is a Volkswagen Golf TDI prepared by British team, KPM Racing. The first roll-out will happen at Silverstone in October.

Paraplegia 101: “Basically, we have broken spines. The higher up the fractured vertebra, the more severe the impediment. I have somewhat restricted use of my fingers, Rainer cannot move his fingers at all.” At age 16, Rainer Küschall was paralysed in a sports accident.

Undaunted, the man from Switzerland went on to win gold medals in the 1972 and 1976 Paralympics, and build a business designing and manufacturing wheelchairs that enable an active lifestyle. He came up with the idea of the frameless wheelchair: “I wanted people to see the person, not the chair.”

His designer’s eye also brought him behind the wheel of a sportscar: “In 2000, I fell in love with a beautiful Cobra replica at the Geneva auto salon. I wasn’t even sure I could get in, but I was so taken with the car’s shape I just had to have it.”

Always a competitive spirit after a 25 year career in athletics, Küschall ventured into motor racing. His current car is a beautiful Crosslé 9S – again, the designer’s eye is evident.

Mission Possible Racing initially had another target, says Küschall: “We wanted to do the 24 Hours at the Nürburgring. After much consideration, we decided it was probably a bit too big an undertaking. Dubai is the most modern racetrack in the world, the event is more amateur oriented.”

Barely three months have passed since the initial decision to go ahead with the plan, “and we’ve spent every free minute working! We found the team and the drivers, from different countries as we planned. Either it all goes down in flames, or it’ll turn into something very good!”

A change in the Dubai regulations sees the maximum stint time for Diesel cars brought up to 2.5 hours which will put additional strain on the drivers. And the driver changes add complexity. This is one of the issues that will be worked on at the first test in Silverstone. “It will take longer but that’s really the whole disadvantage we have”, says Engljähringer, “we are looking at a few options; for instance, one driver could be ‘removed’ – that is, forcibly dragged out – through the passenger side door while the other one gets in through the driver side.”

With different degrees of paralysis demanding different controls, every driver will have his own steering wheel – “that’s the only part that can easily be swapped at a stop. Other than the hand controls for the throttle and brakes, one thing we need are big switches on the dash. We can’t work small, fiddly switches.”

“Driving a racecar with hand controls is not, as such, a major challenge,” says Engljähringer: “If you tried my car you’d get used to the controls within a couple of minutes, and you might find it a relaxed way of driving. We have no choice but to get used to it; but really, it’s easily done.”

The VW Golf offers drive-by-wire systems that can be set up for more effortless operation. Another of the Golf’s advantages of the Golf is its DSG double clutch transmission: 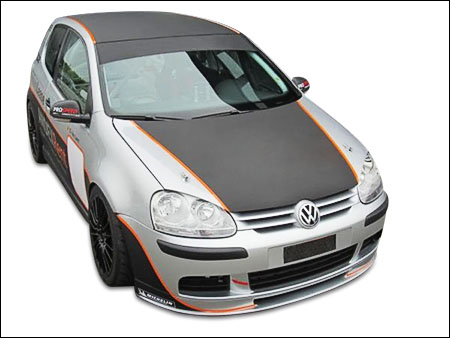 “We wanted a technical package that was as hassle free as possible. We had looked at a diesel BMW but we would have had to add a sequential shifter, and a paddle shift on top of that. And we would have had the problem of the ignition cut with the diesel.

“In his regular racecar, Rainer works the gearchanges with his breath, via a sip & puff control unit. With the DSG, he can use the paddles or even run in automatic mode. That also means he can talk on the radio.”

Engljähringer acknowledges that taking on the Dubai 24 is a big task for endurance racing novices such as themselves:

“If one of the drivers feels he isn’t up to it, we’ll look for a replacement. It won’t be me, though!”, Engljähringer is quick to add. “None of us has ever been confronted with driving at race pace for 2.5 hours at a time, at night, in traffic, with a battery of xenon lights in our mirrors giving us the hurry-up… – it’ll be intriguing. But we’ll see it through!”

The mission may well continue after Dubai: “If Mission Possible takes on momentum, who knows – we might do Bathurst next. Or somewhere else that’s fun! We are in contact with drivers from all continents; there are a number of places where we can run such a car. With the help of technology, we can do some quite interesting things.”

Küschall agrees: “We have to use our brains instead of our muscle. These are the parallels with our daily lives that make it interesting.”