DSC reported from the roundtable, hosted at the WEC Prologue at Paul Ricard, by Gerard Neveu and Pierre Fillion, where questions were asked about the future potential participation of 2017-spec IMSA DPi prototypes at the 24 Hours of Le Mans.

There were divided opinions on the messages being given at that meeting, with some feeling that DPis are highly unlikely to be welcomed at Le Mans in their current projected form. And others feeling that indications were being given that they might be realigned, not with the 2017-spec LMP2 cars, but with the LMP1 privateer grid. 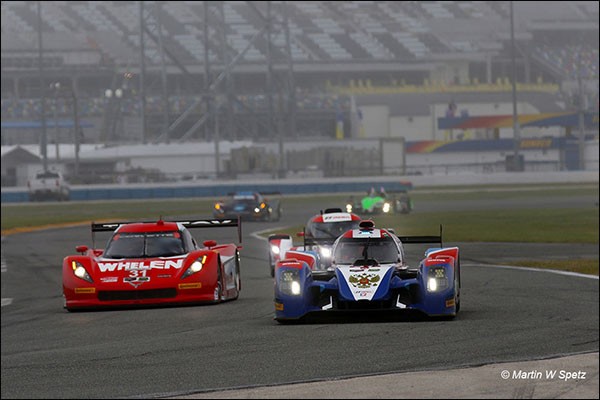 In the wake of this and following on from the publication by IMSA of its outline specifications for the DPi prototypes, IMSA has also released (below) a Q&A to explain the remit and rational for its 2017 headline class:

What is exactly an IMSA DPi car?

A 2017 IMSA DPi car is a standard ACO/FIA homologated 2017 LM P2 Prototype chassis from one of the four approved constructors (Dallara, Onroak Automotive, ORECA or Riley/Multimatic) fitted with IMSA-homologated, manufacturer-designed and branded bodywork and engines. Each participating DPi manufacturer must partner with one of the four approved constructors and commit to a bodywork and engine package.

How is this different from the standard 2017 LM P2 car?

The standard ACO/FIA homologated 2017 LM P2 car must use each constructor’s specific bodywork (and at Le Mans, the “low downforce” bodywork kit version is required) with no modifications and a Gibson V8 engine with a standard-specification Cosworth electronics package controlling car systems and engine management.

For DPi cars, IMSA has defined specific areas of the bodywork regulations to allow manufacturers design and stylistic freedom to create recognition of their specific brands. These areas include the nose and sidepod areas, rear-wheel arch and rear valance. Manufacturers will use this stylized package in conjunction with their eligible specific engine and electronic systems. However, the expanded bodywork freedom will not create a situation of confusion in identification between DPi cars and GT cars.

What cars are eligible in the 2017 WeatherTech Championship Prototype class?

Will customer versions of the DPi car be permitted?

Manufacturers have the freedom to run factory teams or make their car available to customers as they desire.

What fuel and tires will be used?

In the IMSA WeatherTech SportsCar Championship, all cars competing in the Prototype class will use Continental tires and E20 fuel provided by VP Racing Fuels.

How will IMSA balance the differences in the two versions of the 2017 car?

Each engine also will undergo IMSA’s standard engine testing and verification. The target power level is 600 bhp and a comparable level of power and torque will be determined for each option.

Have there been changes made to the DPi or LM P2 platform since the four chassis constructors were selected and announced by IMSA, the ACO and the FIA last year?

Shortly after the selection of the four approved chassis constructors last summer, IMSA received feedback from interested manufacturers that resulted in a need to make a slight alteration to the car dimensions in order to accommodate engines of a certain length. IMSA has worked closely with the ACO and the FIA to confirm the required dimensions. In addition, prospective DPi manufacturers have revealed a desire to use their own electronics providers rather than using the “spec” Cosworth ECU and related electronics that will be used in the Gibson-powered LM P2 cars.

When will the DPi regulations be finalised?

IMSA expects the technical regulations for both DPi and LM P2 to be finalized this month to enable constructors and manufacturers the ability to move forward with the project and meet established deadlines. These cars will make their competition debut next January in the 55th Rolex 24 At Daytona.

The ACO has voiced concerns in the media that, in their opinion, the IMSA DPi platform has moved too far away from the global LM P2 platform. Do you agree with that perspective?

IMSA, the ACO and the FIA have worked very closely together throughout this process and we will continue to do so as the last details of the technical regulations and related elements are finalized. All three organizations have raised concerns over different aspects of the project at different times. It’s all in the spirit of collaboration.

From the start, it has been understood and acknowledged that IMSA’s business goals and objectives for its top Prototype class differ from the goals of the FIA and ACO for a class that is not the top Prototype category for them. The IMSA DPi is intended to attract and involve top-level manufacturer involvement with professional teams and drivers, as it the case with the ACO’s top category, LM P1. The ACO LM P2 category prohibits manufacturer involvement and is a tightly restricted pro/am class.

Throughout this very complex process, multiple interested manufacturers have provided feedback and guidance that has resulted in an evolution of the technical details. As a result, some technical details are different from the original plan. However, the primary objective of using the same chassis, the same core car, and have cars (DPi and LM P2) that could truly compete with each other in ACO and IMSA competition has absolutely been retained.

IMSA and its partners at the FIA and ACO remain closely aligned on the overall objectives of delivering a competitive, cost-effective prototype that can be used for different applications across multiple championships.