The first 6 hour section of the 2018 Gulf 12 Hours saw some excellent racing, and dramas for a number of potentially leading runners. But would finish with Audi’s 2019 R8 LMS Evo just holding sway over the new Mclaren 720S GT3.

A pair of lengthy Safety Car periods in the first three hours rather interrupted the flow of the opening section of the 2018 Gulf 12 Hours after incidents that accounted for several cars.

On the opening lap the debut of the #95 Aston Martin Vatage GT4 was transformed from encouraging pole-setting race run to extended test session as the car was hit on the opening lap by the #66 Bullitt Racing AMG, Broken front right suspension on the Aston, front left damage for the #66

The Vantage would emerge after 82 minutes of repairs – the #66 was back out on track earlier, but would soon be out of the race.

At the front of the race the polesetting #4 Norma was haring away – but behind Ben Barnicoat managed to get by Davide Rigon for second place, new #5 McLaren ahead of #11 Kessel Ferrari 488.

Darren Turner was in the early mix too, the #97 Oman Racing by TF Sport Aston Martin fourth overall. 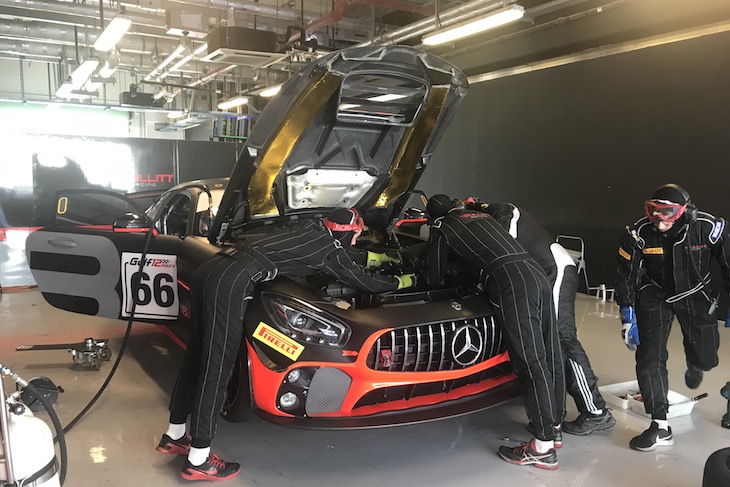 66 minutes in and the Safety Car was scrambled for a multi-car incident in Turn 14, the #8 Car Collection Audi spinning on an out lap in the hands of Dirg Parhofer only to be collected first by the #66 Bullitt AMG and then, fairly comprehensively, by the #51 Spirit of Race Ferrari, all three out more or less on the spot, the #66 leaving a trail of fluid as it attempted to return to the pit, only making it as far as the next corner.

The #84 AKKA ASP AMG GT3 would be another victim – hitting the fluid trail and impacting the barrier, more than two hours of repairs would put the Benz out of contention too! 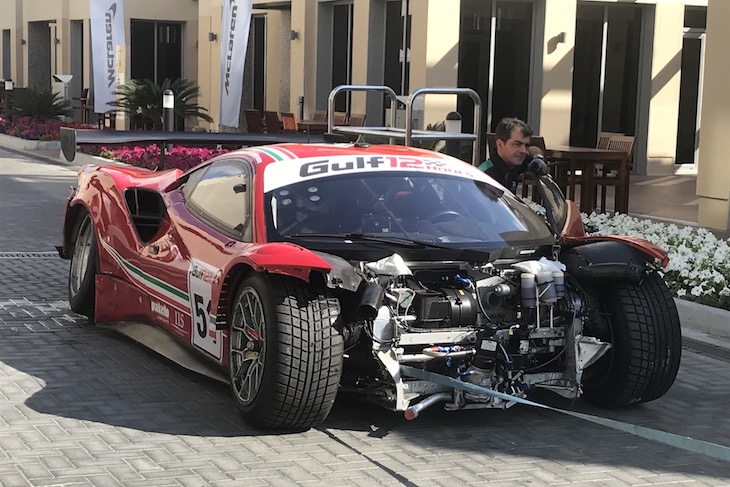 The McLaren squad would pit the #5 under the Safety car from the lead after the leading LMP3 headed to the pits first and would brim the new 720S, Barnicoat staying aboard. However, a stop under the Safety Car would not count towards the required total of 2 minute timed stops this was a gamble to try to seize a tactical advantage of what looked set to be a long caution period.

It wouldn’t quite pay off, the race back to green a lap too early to force their competition in for fuel, though the Oman Racing and R-Motorsport Aston Martins would both grind to a halt as they restarted, the fuel lines just about dry it seems as they eventually both fired up after around a minutes delay dropping both off the lead lap. The #77 Kessel Racing Ferrari too was left to crawl back to the pits – its fuel numbers wrong and nearly stranding the car out on the circuit.

With all of the leading GT runners taking their first two minute fuel stops (three minutes for the two Normas) the McLaren too pitted once again to come back onto the same fuel cycle. That put the car, now in the hands of Alvaro Parente, back into eighth, the Portuguese driver though began to push.  The LMP3s had pitted before the Safety Car and now it was the #39 Norma and #7 Villorba Corse Ligier that led. Behind them though the GT battle was well alight with Klaus Bachler getting by Michael Broniszewski in the #11 Kessel Ferrari for third overall and the GT3 lead.

The #88 Car Collection R8 LMS GT3 Evo was soon by the Ferrari too as, further back, Parente was finding time, and seventh position, finding a way by the #39 Norma.  As the #7 dropped back, and the #4 pitted from the lead it was a GT3 car ahead once again moving into the third hour as Klaus Bachler took the #99 to the lead.

No sooner had the #4 pitted than the Safety Car was scrambled for a second time, this time for the Slidesports GT Cup class Porsche into the barriers on the back straight, Colin Paton out of the #9 car and the car out of the race.

That would back up the field and, after 25 minutes behind the Safety Car, we were back to green for the remainder of the first half of the race.

The leading pair of Audis were immediately battling, Bachler fending off Winkelhock as behind Parente, initially passed by the #4 Norma then repassed the Graff car and on a single lap also found a way by both the #44 Audi and the #11 Ferrari, with the #7 Ligier put to the sword shortly afterwards, the McLaren back up to third and closing on the two Audis before the pitstop cycle started again.

In GT4 meanwhile, it was a not very funny comedy of errors, the #50 Maserati spinning out of a class lead and the team later being called to the Stewards over driving standards.   Sometime later the then leading duo, the sister #90 Maserati and the #25 Cicely AMG got together. Both were damaged, the AMG not emerging for the remainder of the first half, the #90 requiring attention to a broken diffuser. All of that would put the #3 Bullitt Racing AMG into the lead of the class.

There were woes too for the GT Am leading #69 Stile F Ferrari 458 – into the garage for a spell, and the R-Motorsport Aston Martin too saw the inside of the pit building for an extended period dropping the matt grey car out of contention with a clutch change.

There was great speed too from Ling Kang, repeating his Asian Le Mans Series heroics here but the longer stops for the Graff Normas were taking their toll and the #39 would later be another garage visitor – a run for the win over well before the first half of the race.

The quality battle of the first half came from Shane van Gisbergen and Nick Foster, tussling for the lead for lap after lap, the Aussie getting by the Kiwi for the odd moment, but the McLaren man fending him off with better traction and straight-line speed coupled with an unflappable demeanour in the face of raw aggression from the #99 Audi man that included a cautionary wave from the left window to the Audi man as the pair tussled again out of the hairpin. 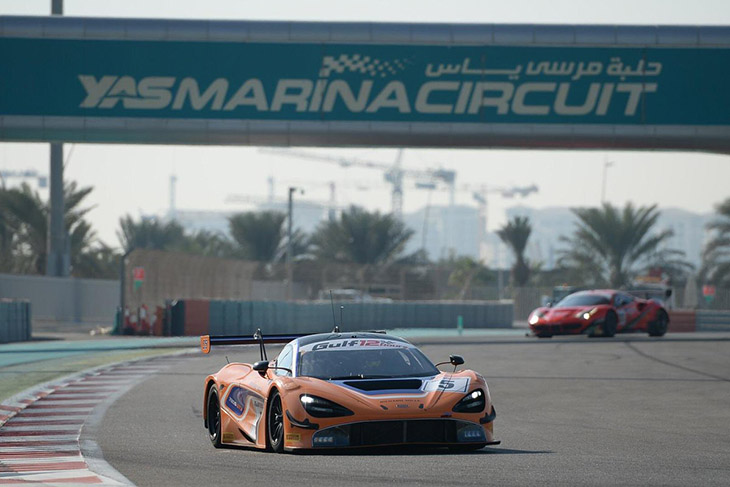 Foster would eventually make a move stick but Attempto had seemingly miscalculated their strategy and were forced to cede the lead to first the McLaren and then the #88 Audi as they took the final two of their required four two-minute timed stops in the final 25 minutes of the five hour window, Stanislav Minsky nowhere close to the required leading pace in a very brief stint in the car.

Into the final hour and there was drama for the leader, Winkelhock tagged by the Pro-Am leading #27 Lamborghini with Miguel Ramos at the wheel. The subsequent spin in Turn 1 would cost him 10 seconds, the lead down to under 20, but both cars would continue seemingly with no other damage. It was the second such incident for the Lamborghini after getting involved with the #90 Maserati a little earlier.

Penalties would see a number of significant runners lose time in the pitlane, the #11 Kessel Ferrari, the GT4 contending #50 Maserati and the second placed car in GT Pro-Am, the all-female crewed #83 Kessel Ferrari all losing time and in some instances significant positions to pitlane speeding issues.

Into the last 20 minutes and Klaus Bachler had target acquired on the third-placed #11 Kessel Ferrari of Davide Rigon whilst Jonny Adam was reeling in Miguel Ramos in a developing battle for seventh.

At the flag it would be a comfortable first-half advantage for the #88 Car Collection Audi of Markus Winkelhock, 27 seconds clear of Parente in the McLaren 720S GT3 the #11 Kessel Ferrari of Davide Rigon fending off Klaus Bachler to the flag by 10 seconds with Clemens Schmid bringing the #44 Attempto R8 home fifth 45 seconds further back.

GT3 Pro-Am would see the #27 Lazarus Lamborghini well ahead after six hours sixth overall and with a laps buffer ahead of a three-car battle between the #83 Kessel Ferrari, #55 Attempto Audi and #98 Beechdean Aston Martin.

The Prototype class was somewhat hobbled by the measures put in place overnight to delay the Normas. The #4 M30 would lead at the break in class but just eighth overall, three laps up on the #7 Villorba Corse Ligier. 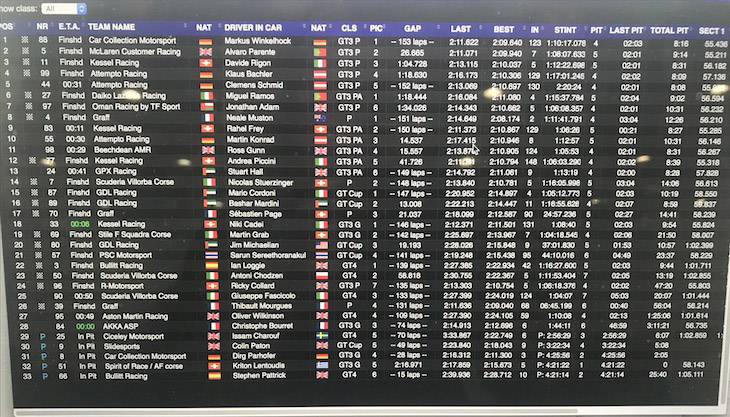