D’station Racing team, run by the successful KTR motorsport preparation company based near Fuji Speedway, have confirmed their entry into the 2019 Autobacs Super GT Series, in a new partnership with Aston Martin Racing that will see the British manufacturer’s return to the series for the first time since 2014.

The team will enter the GT300 class under the name D’station Racing AMR, reflecting their new partnership with Aston Martin.

Team owner Satoshi Hoshino – who recently confirmed his entry into the 2019 24 Hours of Le Mans with D’station Racing and Dempsey-Proton Racing in the #88 Porsche (below), will lead the team alongside general manager, baseball legend Kazuhiro Sasaki, who will manage the sporting side of the operation. 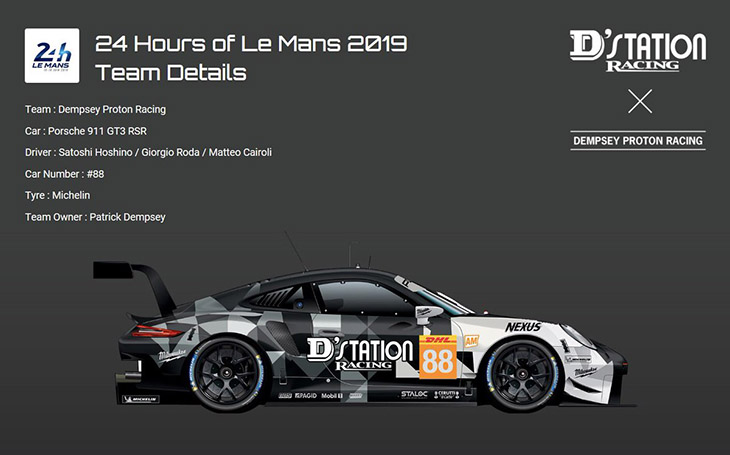 The new Aston Martin Vantage GT3 is powered by a 4.0 litre turbocharged V8 engine from the new Vantage road car, and has already enjoyed success in its first few competitive outings as it prepares for its first full season as Aston Martin’s flagship GT3 challenger across numerous championships in 2019. Its predecessor, the V12 Vantage GT3, raced in Super GT from 2012 to 2014 and won the GT300 class at the 2012 Suzuka 1000km.

D’station Racing is also proud to announce a revamped and experienced driver lineup for the 2019 season. Tomonobu Fujii, a veteran of over 100 Super GT race starts with 8 career GT300 class victories, returns for his third successive season as D’station Racing’s lead driver.

He is joined for the full 2019 season by Brazilian ace João Paulo de Oliveira, the 2010 Japanese Top Formula Champion, and one of the most experienced and successful drivers in GT500 history during his thirteen-year run in the top category from 2006 to 2018. Oliveira has 107 career starts to his name, 9 career GT500 class victories, and 6 pole positions.

Darren Turner also joins D’station Racing as the third driver for the series’ endurance races. Turner has been with Aston Martin Racing ever since they first entered the 24 Hours of Le Mans in 2005. With three class victories at Le Mans, a European Le Mans Series championship title, and eight FIA World Endurance Championship victories to his name, Turner is Aston Martin’s most tenured and successful racing driver.

Aston Martin is the second GT3 manufacturer to return to Super GT after several years out, joining McLaren, who will return to the series in 2019 with Team Goh fielding the new 720S GT3 under the McLaren Customer Racing Japan name.

Tomonobu Fujii said: “I’ve had a long and successful association with Aston Martin at various stages of my career at home and abroad and scored my podium finish in the 2013 Dubai 24 Hours in a V12 Vantage GT3. I am proud and honoured to be the first Japanese driver to race the new Vantage GT3 in the Japanese Super GT championship. The team has been growing in competitiveness since entering the category in 2017, and I firmly believe that joining forces with Aston Martin is the final step on our quest to be successful.”

President of D’station Racing AMR Satoshi Hoshino: “We are very proud to race with Aston Martin in the Japanese Super GT championship. As a team, we believe the Vantage GT3 can lead us to great success and we are excited to be playing a part in the new Vantage racing story from the beginning of its career.”

President of Aston Martin Racing, David King: “We are delighted to welcome D’station Racing to Aston Martin and to include it within our essential group of race partner teams that will compete with the new Vantage GT3 internationally. We’re very proud of the fact that an Aston Martin is once again racing in such a prestigious and important series as Japanese Super GT, and it is further evidence of our expanding motorsport and customer racing activities around the world. It will also help to further the message of our growing AMR Performance brand of Aston Martin road cars and services, and we see Japan as a very important market for this.”