There has been a change to GTE Pro’s Balance of Performance overnight at Le Mans, ahead of today’s race.

Aston Martin’s pair of Vantage AMR (the #95 set pole in the class) have recieved a turbo boost reudction and a two litre fuel cut.

Aston, along with the other manufacturers bar Corvette have received a weight break of 5kg too.

In GTE Am, the Porsches will run with an additional 10kg, while the Keating Motorsports Ford has had a 10kg break.

Current Ford WEC factory driver Olivier Pla, who competed at the opening round of the 2019 ELMS season with Carlin, is set to sign with Algarve Pro Racing, DSC understands, for the remaining rounds of the season.

This morning’s warm up was free of major incidents. 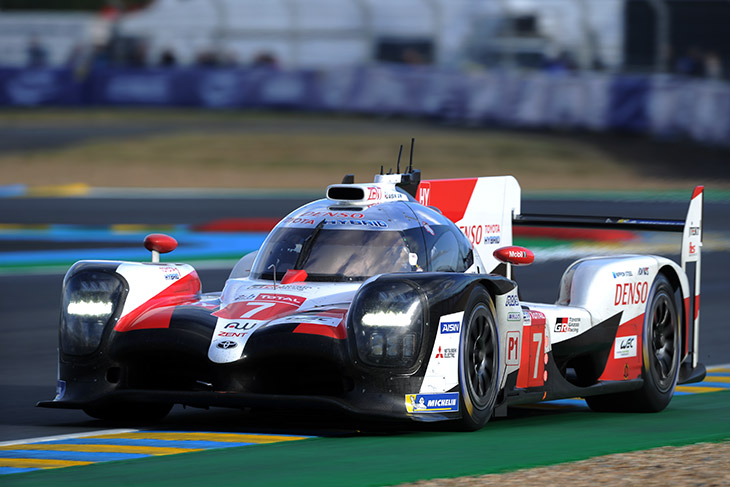 In GTE there were three cars from the GTE-Am category didn’t record lap times. Most notable of these was the #88 Dempsey-Proton Porsche which sat out the session, the team confirming there was no issue with the car. Gulf Racing’s #86 911 RSR continued its strong presence since Thursday by posting a 3:54.071 to finish the session quickest in class.

Other absentees were Keating Motorsport, who were doing installation laps for all three drivers in the distinctive Ford GT while bedding in brakes, and TF Sport’s Aston Martin.

In LMP2, the G-Drive Racing Auris led the way, with a 3:28.763. The car did suffer, DSC believes, a brake sensor issue, which the team is thankful occurred prior to the race!

Fundraiser ongoing in the campsites

Friends of DSC in the campgrounds at Le Mans have been building a model Spitfire to raise money for the Royal British Legion, commemorating the 75th anniversary of the D-Day Landings. 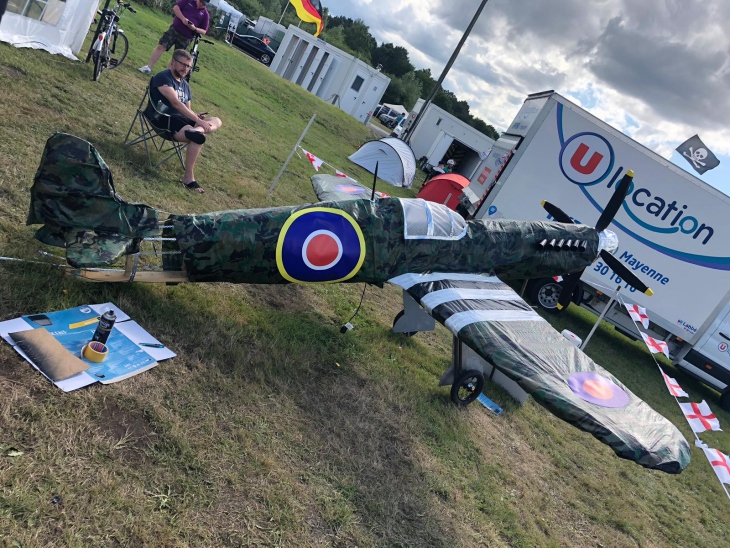 The ‘Devon Dumplings’ have spent the week gradually assembling this huge scale model of the WWII fighter, and have been asking for donations to the (very worthy) cause in return for their labours!

If you wish to see more pictures of the build, find out more and donate, you can follow this link HERE >>>

ACO President Pierre Fillon spoke to DSC briefly after the Aston Martin and Toyota hypercar announcements. Here is what he had to say:

“It’s a great day today with the Aston Martin Valkyrie announcement this morning and Toyota’s now. It’s also a great day for Endurance racing, the Championship and the 24 Hours of Le Mans. I believe it’s the start of a new era. We know there are more manufacturers out there who have expressed interest [in these new regulations]. At least, we can start [the championship] with two [makes] in September 2020, for the new season. They will provide some great racing for our fans.”

“Looking back at Toyota’s initial plans, one can only recognise that they have accepted many changes. With that said, I would like to highlight the fact that Toyota was extremely open-minded”

“I am only discovering this new formula now. It’s worth taking our time and reflecting before we go any further. I will be most specifically interested in understanding how the balance of performance is ruled and applied.”

ORECA head Hugues De Chaunac spoke to DSC yesterday and explained that with the rules now out for the 2020/21 WEC top class, the French motorsport constructor will search for an OEM partner to get cars on the grid. 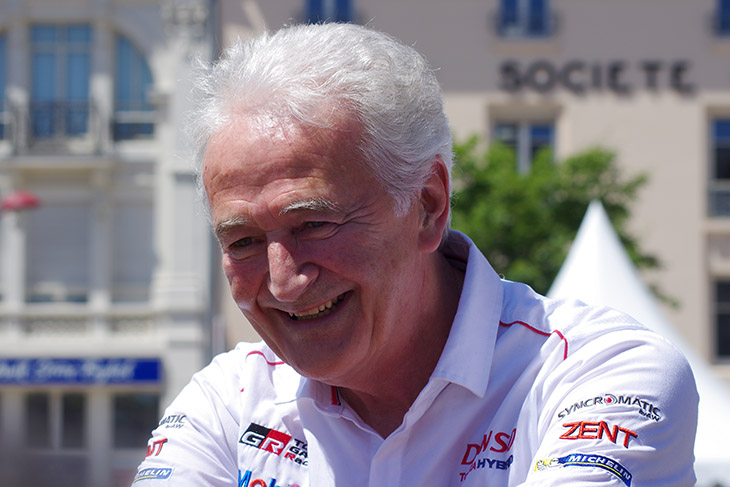 “We have started working on several car [design] options,” he said.

“Our engineers need to increase the pace now and start talking with one or more manufacturers. Whether it is a French manufacturer or not is not critical. Our objective is September / October 2020 but [ORECA being ready] could happen later on. Our hard deadline, in any case, is Le Mans 2021.

“Our biggest challenge, in the end, will be time management. We are really short on time and we need to be fast, creative and innovative. The teams that will be here are innovative too. This is a new way of addressing this [new] set of regulations as there is a BOP now. In essence, there is no longer a point in developing something very complex.

“You just need to be spot-on, with that optimal technical window. Whoever will make a difference is he who is able to produce a fast car for the WEC and at Le Mans.

“We don’t have many details about the BOP, yet it is is a process through which teams are able to enter and remain in a series. The advantage of the BOP is that it prevents people from spending high sums of money as you aren’t able to enjoy the benefits of over-developing a car anymore. The inconvenience is obviously that people always want the fastest car to win and this will skew it. This is driven by budgets.

“It is time to be reasonable again. 3, 4 or 5 years ago, when it was the Porsche, Audi and Toyota era, there were sums spent that are no longer in tune with what teams can accept today. I have defended that idea a lot. A BOP or a 3’30 lap time are instruments to remain within such budgets. With a low budget, you can convince OEMs to join the competition now. You no longer need to spend a lot of money.

“ORECA is currently looking at partnering with an OEM. There are several discussions ongoing. It is also great to have the option to go hybrid or non-hybrid. That is something we pushed for. We will be able to accommodate both options. It seems that new manufacturers will opt for a non-hybrid approach in order to compete inside the window of the BOP.”

Ginetta Chairman Lawrence Tomlinson is delighted that his pair of Team LNT Ginetta G60-LT-P1s have been accepted to compete in the 2020/21 FIA WEC season. 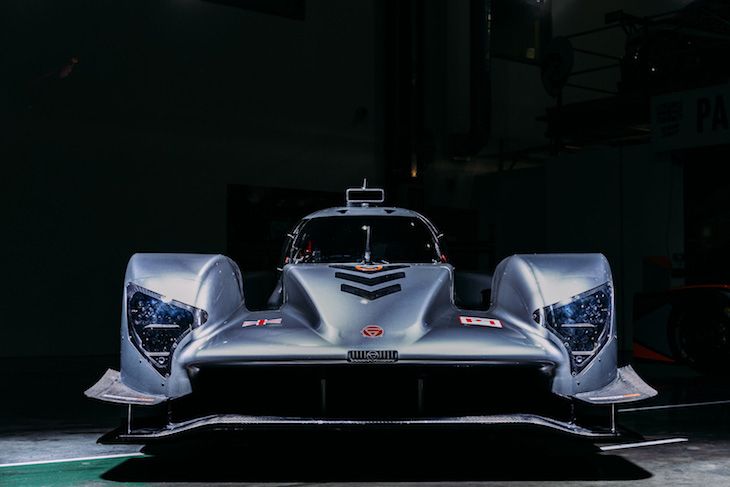 With the entry list now confirmed (with 33 cars), the G60-LT-P1, now AER powered, will return to the WEC grid later this year.

“We are genuinely excited by the performance and potential of our LMP1 car now we have a competitive powertrain. The aero has always been right up there with the very best and, as testing has shown, with the British AER engine, we now have the package to challenge for best privateer and even an outright win.

“We are proud to have pioneered the LMP3 class and we have comprehensively updated every area for our Gen 2 car to make what we believe is a race winning package. It should be a great car to drive, perfect for pros and gentlemen drivers alike, with a really balanced and predictable handling characteristics.

“These announcements come off the back of some tremendous momentum within the Ginetta brand, when combined with the launch of our road-going Akula supercar and the ongoing success of our entry-level motorsports programme and ladder.”

Tomlinson concluded: “There is a fierce passion that runs through the Ginetta team as the last British-owned sportscar company of any scale. It inspires us to drive for success on and off-track.”

It starts at 15:00 local time today. Stay tuned to DSC for analysis and reports throughout. Thanks to all our readers, who have been keeping up with this week’s content. It’s been a big one for DSC, and sportscar racing in general.

Also, keep our Resources Page bookmarked to help you keep up.