Team Japan made the very best of another weather affected and interrupted race to take a dominant second qualifying race win, Hiroshi Hamaguchi very impressively driving away from the field on a sopping wet Vallelunga circuit.

The combined results though will see the Japanese effort start from the second row of this afternoon’s grid behind provisional pole setter Poland with Team Germany alongside them on the front row. 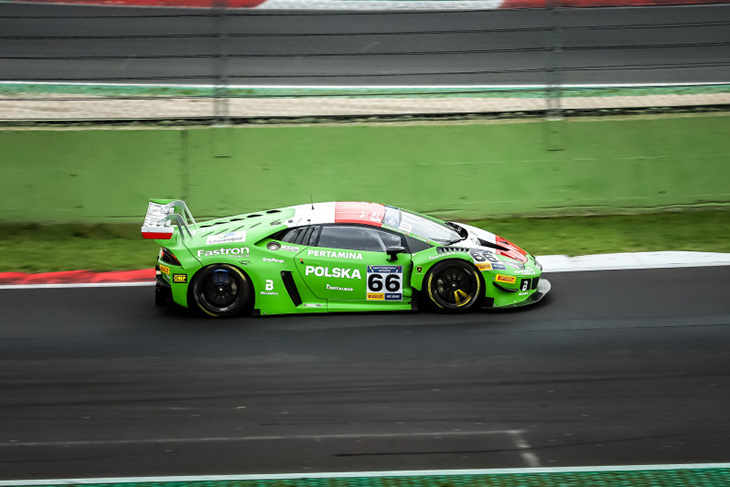 Qualifying Race 2 got underway behind the Safety Car on a sopping wet track after yet more torrential rain on the grid.  The Safety Car stayed out for 4 laps but the rain was about to return with a vengeance as the Audi R8 pulled in to release the field, that would see a single green flag lap.

That lap would at least see a spirited battle between the two leading cars, Sasahara in full defensive mode on a near grip-free track with Jim Pla looking for a way by – he managed to do it around the outside at T10 to lead, just as the Safety Car was called to deal with the Team Malaysia Porsche and Team Russia Ferrari, both cars off the circuit, the Porsche in the tyre barrier.

The field again started to form up in the train but the Team Italy Ferrari, in the hands of Giorgio Roda slithered off, the rain hammering down again, and with the Ferrari’s rear wheels in the gravel Race Control threw the Red Flag, this time the field brought down the pit lane, the cars rapidly covered and Race Control issuing updates on timings for updates, and that the remaining time for the race was likely to be 40 mins.

(The Malaysian car would be returned to the pits under the red flag with repairs started immediately, it would rejoin the back of the field at the restart 2 laps down).

Race Control announced at 10:35 that the race would restart at 10:50 and would run for 30 minutes. The driver changes will take place for the restart the first drivers then getting just one racing lap!

As the cars rejoined the track behind the Safety Car the clock now running down from 30 minutes and the sun came out! the #51 Belarus Ferrari was dealt a drive-through for an overtake under the earlier Safety Car!

The Safety Car finally pulled in with 22 minutes remaining.  Hamaguchi would cede second to the Swiss Lamborghini of Lenz on the first flying lap with Paul Ip in trouble and tumbling down the order in the Hong Kong Honda.

Hamaguchi fought back though, back to second with Hanss Lin in the Taipei Huracan also passing the Swiss car and making contact with Hamaguchi in an attempted move for second, that would see a black and white flag shown to the Japanese driver.  The Japanese fended that off and pushed hard again, blasting by Beaubelique for the lead with 17 minutes remaining.

The Swiss and French cars were under real pressure and started to drop back, Hamaguchi away and clear with Lin up to second chased hard by Ramos in the Team Portugal Audi, Lewandowski putting in another strong run in the Polish Lamborghini in fourth and Louis Machiels making progress in the Belgian Audi too. 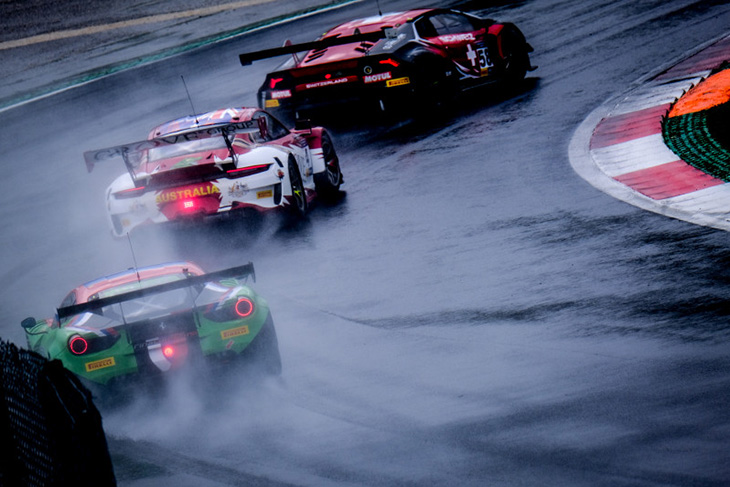 A midfield battle between Yoluc, Haigh and Moller initially saw the Dane split the Turkish and GB entries but his Honda then ran off the circuit, dropping him back a couple of places again. Whilst that was going on Inthraphuvsak passed all three in the Thai Porsche for 9th

8 minutes to go and Machields grabbed fifth for Belgium, now ahead of the Swiss Lamborghini, Ramos up to second and ahead of Lin, setting off in attempted pursuit of the leader 6.5 seconds clear.  Inthraphuvsak’s progress continued, passing Görig and Beaubelique and closing in on Lenz. He’d grab that spot on the penultimate lap

Ferriol was substantially assaulted to the rear by Zhang in the final 3 minutes, the Team USA Ferrari into the gravel at T10 – Zhang dealt a drive-through.

A clash between the Italian Ferrari and Moller’s Honda saw both cars go around.   Hamaguchi though would come home the winner, almost seven seconds clear after a very impressive run, Ramos and Lin completing the top three.

The provisional grid order for the Main Race is, therefore: