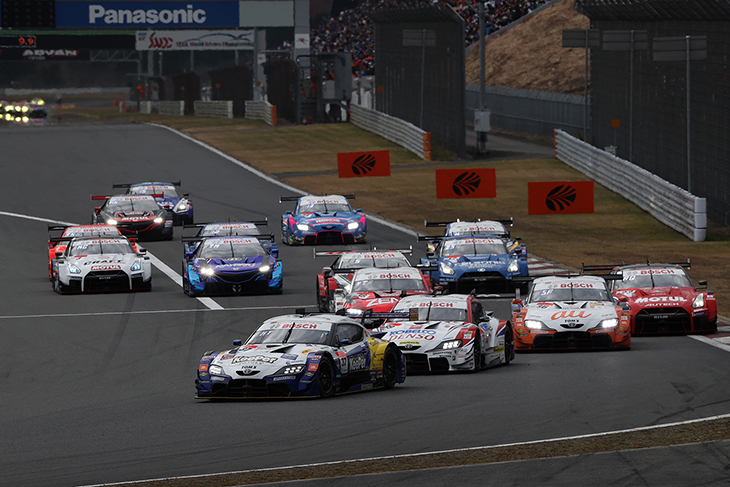 All GT500 teams and drivers have been confirmed in prior communications from Honda, Nissan, and Toyota. Team Red Bull Mugen is the only team that is yet to confirm a tyre supplier for the 2021 season – but of the 14 teams that have confirmed their choice of tyre suppliers, nine will run with Bridgestone, two each for Michelin and Yokohama, and one team with Dunlop tyres.

GT300 announcements have been coming in from the first announcement of Goodsmile Racing & Team UKYO in December, to Pacific CarGuy Racing’s announcement earlier today, along with major programmes from the big Japanese manufacturers.

Audi Team Hitotsuyama will retain lead driver Shintaro Kawabata for their 2021 lineup. Kawabata was a first-time winner last season with Hitotsuyama, capturing the victory in the 25 October race at Suzuka Circuit.

His new teammate is Takuro Shinohara, the reigning TCR Japan Series Champion. Shinohara made three GT300 starts in 2020: Two with Pacific-D’station Racing, including a career-best 5th place finish at the final round at Fuji, and one with X Works Racing – who will not return to the series in 2021.

They’ll join Team LeMans with Motoyama Racing in a two-car Audi customer programme – the number 6 Audi of Satoshi Motoyama & Yoshiaki Katayama is still yet to announce a title sponsor for their reconstituted entry.

Team founder Yasuaki Suzuki has appointed Takashi Kumagai as his successor in the role of Team Director, while Kazumichi Goh will still be involved with the team through Customer Racing Service Limited – the company that previously operated as McLaren Customer Racing Japan in 2019.

arto Ping An Team Thailand have confirmed their full-season driver lineup, of the returning 2018 GT300 vice-champion Sean Walkinshaw, and Thai national Nattapong Hortongkum – who planned to enter the 2020 seasons before abandoning his campaign due to COVID-related travel restrictions.

Giuliano Alesi, the former Ferrari Driver Academy prospect, has been assigned as their third driver, and will likely race with the team this season if Hortongkum is yet again unable to race in 2021.

The experienced duo of Takuto Iguchi and Hideki Yamauchi will indeed return to drive R&D Sport’s brand-new #61 Subaru BRZ GT300, based on the redesigned second-generation model. Subaru will host an official shakedown event from Fuji Speedway on 22 February to formally launch the new BRZ GT300.

In addition, R’Qs Motor Sports return with the lineup of owner/driver Hisashi Wada and Masaki Jyonai, and Muneharu Ito of Arnage Racing – who is in charge of vehicle maintenance for R’Qs – has confirmed that they will run the Mercedes-AMG GT3 Evo model this season:

That still leaves just three cars that are yet to confirm their driver lineups for 2021: Team Mach, and the two-car JLOC effort. JLOC tested six different drivers at Okayama earlier this month, but only four will earn a full-time seat in their two cars.

Twelve brands will be represented on the grid through fourteen unique models. There are six GTA-GT300 cars, but now just two remaining GT300 Mother Chassis entries, with the other 21 cars being GT3s. In the tyre war, five teams will use Bridgestone tyres (muta Racing INGING, apr #31, Saitama Toyopet GreenBrave, ARTA, and K2 R&D LEON Racing), five will use Dunlop tyres (both Gainer cars, LM Corsa, R&D Sport, and K-Tunes Racing), while the other nineteen entries will be supplied by Yokohama.

Along with X Works and Michelin exiting GT300, D’station Racing’s departure from the series has been confirmed, and Aston Martin will not have a customer team on the GT300 grid in 2021.