It’s a time of uncertainty for GTLM – the not-too-distant promise of LMDh looks set to leave factories and well-funded privates with the option of continuing with the hefty price-tag of GTLM/ GTE Pro, or opting for 2023 and beyond for a not-so-ver-different level of commitment but adding the appeal of contesting overall blue riband race and Championship victories.

Porsche had already announced their pull-out for 2021 some time ago with BMW leaving it late, very, very late to confirm their reduced programme.

The championship-winning pairing of Garcia and Taylor is back again for the 2021 season. Corvette Racing was unstoppable last year in what turned out to be a dream debut for their C8.R. The GTLM class looks set to be slim this season with the loss of Porsche and likely loss too of BMW’s full-season programmes. 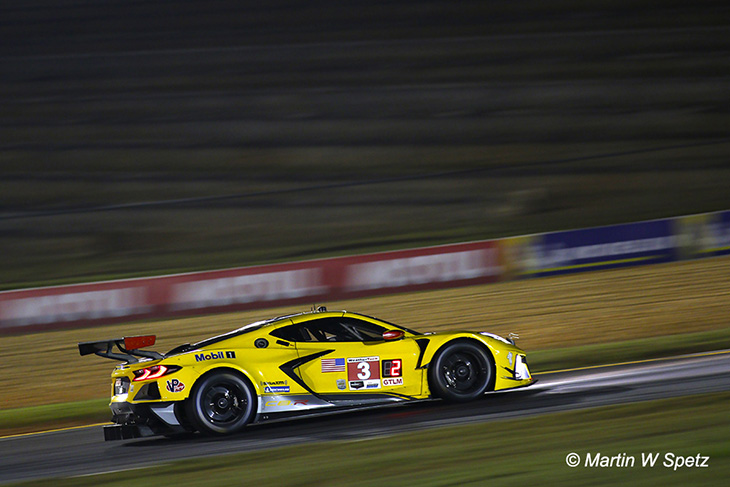 There’s not much to say about Garcia, his name is synonyms with Corvette Racing having driven for the team since 2009. In recent years, we have seen a changing of the guard at Corvette. Taylor has replaced Jan Magnussen and Oliver Gavin has stepped away. Garcia is still in the team’s full-time roster, though, and shows no obvious signs of slowing down. He will be looking for his second Rolex 24 at Daytona win after his first triumph in 2015.

One of IMSA’s most likable drivers, Jordan Taylor is back again. After spending many years as Corvette’s third driver for races like the Le Mans 24 Hours, Taylor got the promotion to the full-time seat and did not disappoint. Five wins, three podiums, a driver’s, team’s and manufacturer’s championship in his first season led to one of the most impressive seasons for Taylor. He’s one of the most charismatic drivers in the paddock and his social media channels are well worth a follow.

Catsburg moved over from BMW to Corvette last season and was the team’s endurance driver. The highlight of his season was a second-place finish at Petit Le Mans. With one year under his belt and a reduced GTLM field, the odds of success are higher for Catsburg. Like Taylor and Nick Tandy, Catsburg has been a part of Corvette’s new generation of drivers. A promotion to a full-time role could be in the cards for Catsburg if Garcia or Tommy Milner steps away.

The Milner-Gavin era in the #4 Corvette comes to a close this season as ex-Porsche man Nick Tandy slides into the fulltime seat in the C8.R. The #4 Corvette played second-fiddle to the #3 Corvette last season, just one win to their teammates’ five. In a reduced GTLM class, their sure to have more success and will look to put up a fight against their teammates for the title. 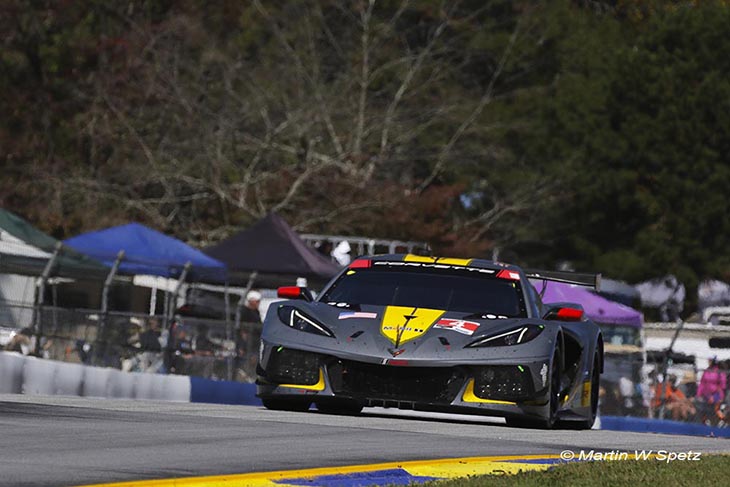 Tandy had been synonymous with Porsche, driving for the German-marquee in their Le Mans factory teams in both the 919 Hybird and the 911 RSR. With the Porsche GTLM factory effort ending, he needed a new home. After Gavin announced he would step away from full-time racing, Tandy became an obvious candidate to fill the role. Aside from his racing ability, Tandy’s personality makes him a nice fit for Corvette who does not shy away from letting their drivers show their character.

What’s there to say about Milner, he’s an excellent racing driver who has been with Corvette for a decade now. Two Le Mans wins, a GTLM championship in 2016, two wins at the Sebring 12 Hours, and a win at the 2016 Rolex 24 at Daytona. Perhaps the most notable thing about Milner is who’s no longer with him, that being Gavin. The two had been teammates for a record nine seasons. Milner likely won’t admit that there’s any difficulty in adapting to a new teammate, but it will be interesting to see how he gets along with Tandy this year.

Finally, there’s Alexander Sims, another new face in the Corvette stable. The former-BMW factory driver has experience in sportscar racing with his strongest season coming in 2017 when he finished runner-up in the GTLM championship in the BMW M6 GTE. He has won at Petit Le Mans and Watkins Glen and most recently drove for BMW in their Formula E team where he took one win in Saudi Arabia. After so many seasons with the likes of Marcel Fassler and Mike Rockenfeller filling the endurance driver roles, Sims represents a shift in direction for Corvette.

Risi Competizione is back for another run at the Rolex 24 at Daytona. They ran last year’s race and had announced plans for the Sebring 12 Hours but had to abandon those ambitions in the wake of COVID-19. As of now, there are no additional plans for the team but there are options under consideration for the Houston-based squad. Their lineup, as it always tends to be, is strong and filled with Ferrari factory drivers. 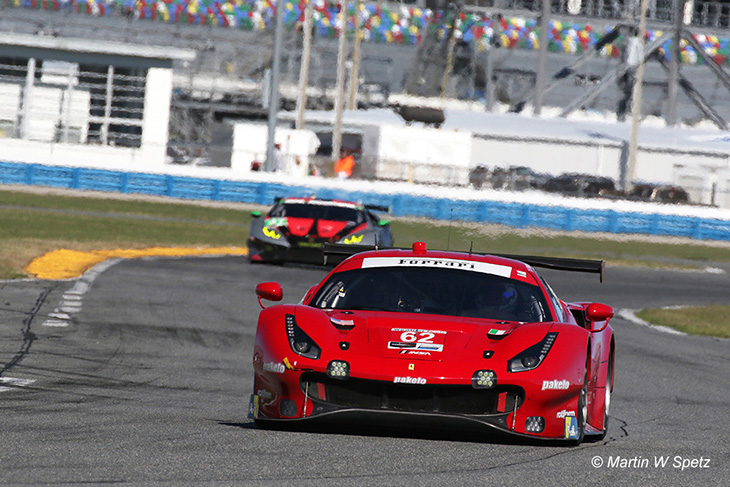 Calado will be making his sixth start at the Rolex 24 and his fifth with Risi Competizione. He has two podiums including a second-place finish in 2019 at the race. He is a well-accomplished Ferrari driver with a Le Mans 24 Hours win and an FIA World Endurance Championship title to his name.

The record of Pier Guidi is very similar to Calado’s record as the two have long been teammates. Pier Guidi drove with Calado and Daniel Serra to victory at the 2019 Le Mans 24 Hours and he partnered with Calado for their 2017 FIA WEC title campaign. The Italian is one of the strongest and most experienced drivers in the Ferrari stable. This will be his eighth Rolex 24 at Daytona. He has one victory in 2014.

Also making his eighth start at the Rolex 24 will be Davide Rigon, this will be Rigon’s sixth with Risi Competizione. Rigon has one podium apiece at the Daytona and at Le Mans. Apart from Daytona, he has sparse experience with competing in America as most of his time has been spent in the AF Corse WEC programme.

Finally, there’s Gounon who will be making his first start with Risi Competizione at the Rolex 24. He is the least experienced Ferrari driver in the team, but he has raced with Risi Competizione at the Le Mans 24 Hours in 2019 and 2020. He also has experience with the Bentley Team M-Sport effort in the Intercontinental GT Challenge, including a win at the 2020 Bathurst 12 Hours.

This is perhaps the most interesting entry in the GTLM field this season. There were rumors of Weathertech Racing and Cooper MacNeil making a move up to GTLM, likely in a Ferrari 488 GTE as they raced a Ferrari 488 GT3 in GTD last season. The ending of the Porsche factory effort, however, presented the opportunity to pick up a Porsche 911 RSR, which Weathertech Racing have pounced on. The programme will be managed by Proton Racing, the highly experienced Porsche team who have run 911 RSRs in the FIA WEC in recent years. A Le Mans 24 entry is also being targeted for this operation. 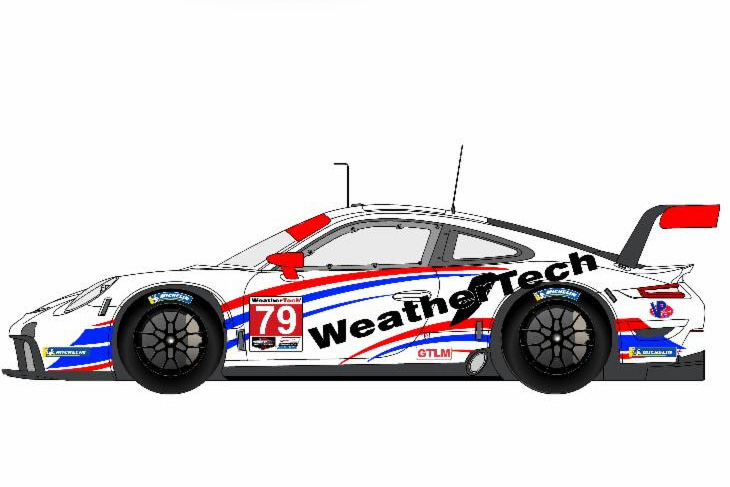 The pressure will be on MacNeil to perform this season. The son of Weathertech CEO David MacNeil, Cooper has had success in racing before. He has been a frequent competitor in Ferrari Challenge and in GTD, but GTLM is a new world. Factory efforts with top tier drivers will leave MacNeil with his stiffest competition yet. If there’s a year to make the jump up, though, it’s likely this one. The reduced GTLM grid size will give the Silver-rated MacNeil the room to acclimatize to his new surroundings in what is traditionally a Pro-Pro class.

Leitz is one of the most experienced Porsche drivers in the world. He has driven in every Le Mans 24 Hours since 2007, all of them in Porsche GT machinery. He has two wins at Le Mans and three wins at the Rolex 24. He’s raced in the FIA WEC with the Porsche factory team (taking the Drivers championship in 2015) and is a great addition to this lineup.

Another FIA WEC Porsche factory driver, Kevin Estre brings yet more Porsche experience to this lineup. He won the 2018-19 WEC LMGTE Pro title with Porsche and won the 2018 Le Mans 24 Hours. Estre and Lietz were in opposite cars in the WEC but will now share a car for the Rolex 24.

Rounding out this lineup is Gianmaria Bruni. At 39-years old, Bruni is the veteran of the team. He has experience as a Ferrari factory driver and has been a part of the Porsche stable since 2017. He has three Le Mans wins and two FIA WEC titles to his name, all of them with Ferrari. He raced a part-time IMSA season in 2017 and scored a podium at the 2018 Sebring 12 Hours. This will be his fifth Rolex 24 at Daytona start and his first since 2018.

*Who will partner with MacNeil for the rest of the season is yet to be announced. We are likely to see a rotating cast of Porsche factory drivers. 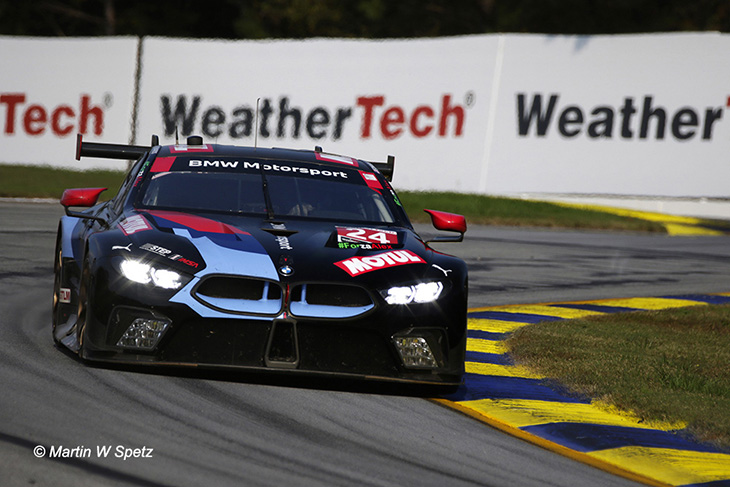 Full details of the BMW Programme are still awaited – including the driver roster, though a seemingly premature social media post seemed to suggest that one car at Daytona will feature John Edwards, Marco Wittman, Augusto Farfus and Jesse Krohn.

Multiple sources continue to maintain that the German manufacturer has been looking carefully at reeling back the full season effort from past seasons to a reduced programme focused on the four enduro races in the IMSA calendar. The BMWs though come to Daytona looking to complete a ‘hat trick’ of wins, the team’s car having taken class victory for the past two seasons at the season opener.